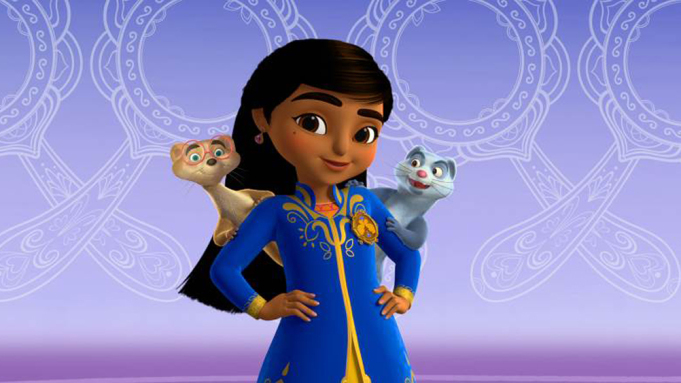 The show centers on a whipsmart 8-year-old named Mira — voiced by newcomer Leela Ladnier — as she solves mysteries in the colorful and fictional kingdom of Jalpur in India, with the help of two mongoose friends, Chikku (Ambudkar) and Mikku (Penn). The show features various facets of Indian culture, including dance, food, dress and song, and episodes centered on holidays like Diwali and Holi, a first for an animated Disney show.

And for the cast, which is exclusively of South Asian descent, the experience of bringing Indian culture to life for a younger audience has been both unique and heartening.

“Why this one feels a little more different is because this one gets viewed and consumed at a very, very early age,” Pinto, who voices Queen Shanti, told Variety, crediting the creators and producers (who were not of South Asian descent) for their research. “They did really pay attention to detail, right from the clothes that [Mira’s] wearing and the food that they talk about, laddus and whatnot. [I] really like that we didn’t have to whitewash it to make it palatable.”

This included consulting with Bollywood choreographers for dance sequences and using Hindi linguists to ensure proper pronunciation of certain words in the script, a unique experience even for Penn, who speaks both Hindi and Gujarati. It’s an attention to detail and nuance that can be rare in projects like this, he said.

“The caliber of a Mira Nair, a Jhumpa Lahiri, that’s the caliber of folks who try to pay attention to detail because they know, in addition to representation, it’s just going to bring out the best story possible for the audience. That’s what’s been so amazing about this experience, too,” Penn said.

Added Ladnier, “This is going to expose young kids to South Asian culture and, hopefully, normalize our culture.”

For Ambudkar, getting to rap and sing as a mongoose alongside Penn was a full-circle career moment.

Ambudkar recalled meeting Penn in a subway in New York during Ambudkar’s college days and telling Penn how much he admired his work. He reiterated the same sentiment to Penn when he saw him performing in a play years later.

“He’s older than me, but when I was coming up, he broke, he made it possible,” Ambudkar said. “So to be standing next to somebody who literally made my dream seem like it could be a reality is surreal, and it’s an amazing gift.”

Penn said he felt similarly about fellow performer Mandvi (who voices Sahil on the show), whom Penn looked up to early on in his own career.

“For Utkarsh, Aasif and I to bookend a conversation like that, and the fact that we get to be in the same show together is pretty fun,” Penn said.

Among the cultural nuances “Mira” includes: addressing elders as “auntie” and “uncle.” The cast drew on their own experiences to give their best “elder” advice to young people for Variety.

Ambudkar has a more practical approach.

Watch the cast talk about “Mira, Royal Detective” above.