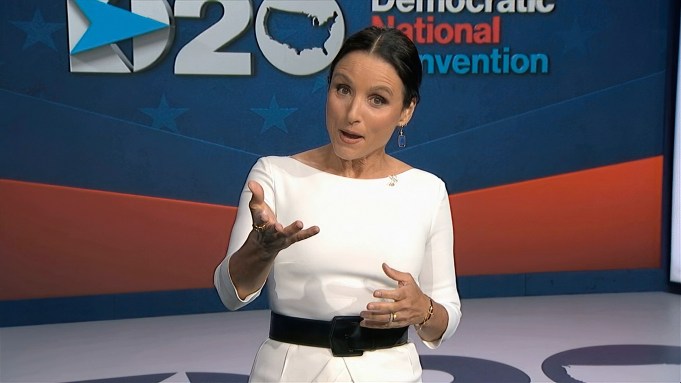 Julia Louis-Dreyfus displayed her trademark razor sharp humor as she opened the fourth night of the Democratic National Convention on Thursday.

In praising Vice Presidential nominee Kamala Harris, Louis-Dreyfus said she cannot wait to see her debate “our current Vice President, Mika Peince.” She continued to play up not being able to pronounce Mike Pence (“Some kind of weird foreign name,” she said. “That’s what people are saying, strongly.”), a dig at those who have not pronounced Harris’ first name correctly, as Pence did at a recent campaign stop.

She also took a shot at Trump, saying, “Joe Biden goes to church so regularly that he doesn’t need tear gas and heavily armed troops to get there.”

In encouraging people to text VOTE to 30330 for information on voting in their community, she said that it was easy to remember the number because “that’s the year Donald Trump will finally release his tax returns.”

“If we all vote, there’s nothing Facebook, Fox News, and Vladimir Putin can do to stop us,” she continued.

She then went on to talk about the first time she met Democratic Presidential nominee Joe Biden when he was Vice President and she was starring on the HBO political comedy “Veep.” After that meeting, she was asked to be on the cover of Amtrak’s “Arrive” magazine “which no one reads, even though it’s free.”

“The day it came out, my phone rang and it was the Vice President,” she said. He told her he loved the cover and the article. “That is just one of the many reasons that I wanted to be here tonight for Joe…Joe Biden not only knows how to read, he reads everything.”

Louis-Dreyfus is one of many celebrities that have joined the DNC proceedings over the past several days, with others including Billie Eilish, Kerry Washington, John Legend, Eva Longoria, and more.