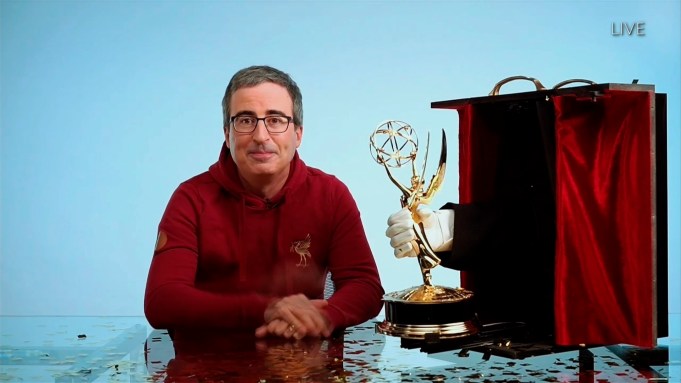 John Oliver won his fifth variety talk series Emmy in a row on Sunday night, and immediately afterwards questioned whether the ceremony should even be taking place this year because of the coronavirus pandemic.

Host Jimmy Kimmel, who lost out to Oliver once again, jokingly asked asked the same question earlier on during his opening monologue.

As for what the future of awards shows looks like, Oliver was unequivocal that if COVID-19 continues to spread across the country, this audience-less affair is the only real option.

“This has to be the way ahead because it’s not safe to do it any other way,” Oliver said.

Whereas the acting winners were hand-delivered their Emmys by a representative wearing a hazmat suit, Oliver’s statuette popped out from a large black box with an explosion of confetti.

Oliver was visibly shocked when the Emmy was thrust towards him and a joked about his surprise backstage.

“A decapitated hand gave me an Emmy out of a box and that’s how I always dreamt it,” he said

Other than Kimmel, Oliver and “Last Week Tonight” beat out Trevor Noah, Stephen Colbert, Samantha Bee, and Seth Meyers for the award.