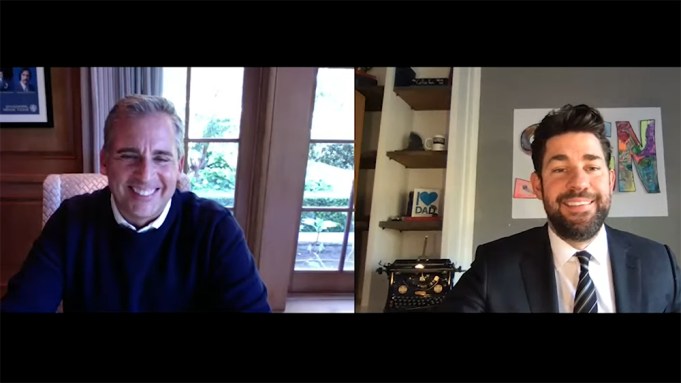 John Krasinski and Steve Carell virtually reunited for an “Office” reunion as part of the first episode of Krasinski’s new YouTube series, “Some Good News.”

In an effort to brighten up spirits during the Covid-19 pandemic, Krasinski launched his new YouTube series on Sunday — and there was no better inaugural guest than his former “Office” co-star to help lighten the mood.

Celebrating the NBC series’ 15th anniversary, Krasinski and Carell shared some of their favorite moments and memories from the show.

“I was a waiter when I got that job. I was 23 years old,” said Krasinski. “After the pilot, I went back to waiting tables because I was sure nothing was going to happen with it. We all kind of came into it with that vibe. I remember none of us had done anything huge.”

“It’s such a happy surprise that after all these years people are still tuning in and finding it today. It’s pretty cool,” Carell added.

The pair went on to reminisce about their favorite scenes while filming the mockumentary series that premiered back in 2005.

“I think most of the memories have to do with things that we shared as a cast — when we were doing Fun Run and it was about 105 degrees outside,” Carell said while blooper footage was shown.

Carell added that one of his favorite episodes was when Krasinski’s character, Jim, impersonated Dwight Schrute (Rainn Wilson). “Part of what was so much fun about it was that everybody in the cast was rooting for everybody else. People would step back when it was time for people to shine and celebrate it. When you came in as Dwight that day, it was crazy watching Jim do Dwight. You were a very good impressionist in general, I don’t think people know,” he said.

The former co-stars also addressed reunion rumors, but agreed that they would much rather reunite with the cast to hang out as friends. “Listen, I know everyone’s talking about a reunion. Hopefully one day we just reunite as people, and just all get to say hi,” Krasinski said.

Krasinski ended his show with a chat from 15-year-old Coco, who just finished her final round of chemotherapy, to share some positive news.

“You are my newest and biggest hero,” Krasinski told her.

The cancer survivor returned home from her final treatment to her entire neighborhood cheering her on. Coco’s mother sent a video of the celebration to Krasinski via Twitter, with the tweet since getting 12.4k retweets and 64.8k likes.