Joel McHale Gives His Take on ‘Tiger King,’ and Why That ‘Community’ Movie May Finally Happen 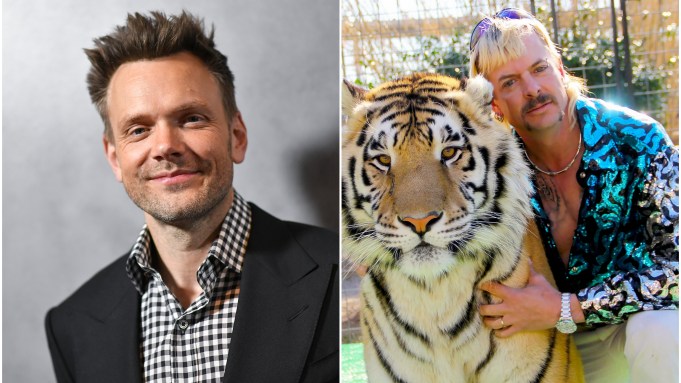 Joel McHale isn’t surprised that Carole Baskin, one of the key subjects in Netflix’s smash hit docuseries “Tiger King,” refused to appear in his reunion special, “The Tiger King and I.”

Baskin has heavily criticized her portrayal on “Tiger King,” which pretty substantially laid out the case for why many people believe she was involved in the death of her first husband, Don Lewis — including Lewis’ own family.

“That whole phenomenon whether she has killed her husband has also taken on a huge life of itself,” McHale told Variety on Sunday during an Instagram Live interview. “It’s not surprising they’re not very cooperative at all.”

Does McHale believe she did it? He’s not sure — but at least based on the documentary, “she probably did.”

Of course, “Tiger King” is mostly the story of Joe Maldonado-Passage (a.k.a. Joe Exotic), the former owner of a wild animal zoo in Oklahoma who’s behind bars, sentenced to 22 years in federal prison for plotting to have Baskin murdered, as well as several wildlife violations — including killing tigers.

“I can’t tell you why the ingredients when together made that thing so fascinating, but it worked,” McHale said of “Tiger King.” “For whatever reason, everyone’s watching this. It’s crazy.”

But beside the world of Joe Exotic and the small kingdom he created, McHale said he believed it was important to put the focus on the animals at the heart of “Tiger King.”

“The documentary was first and foremost about big cats living in the United States in roadside zoos and private zoos,” McHale said. “They say there’s between 5,000 and 10,000 of them in the country, and that’s way more than what are in the wild. That is a very insane number. It’s a really good topic to talk about. After that first moment of the documentary when that guy has a snow leopard in his van, I was immediately interested.”

But then there are the real-life people in “Tiger King” who provide so many of the unbelievable moments and plot twists. Although Baskin and South Carolina-based big cat dealer “Doc” Antle wouldn’t participate, many of the series’ other participants did agree to interviews with McHale.

That includes Jeff Lowe — who now owns the wild animal zoo in Oklahoma previously run by Joe Exotic. Lowe has also critiqued “Tiger King,” which highlights his involvement in the eventual arrest and conviction of Maldonado-Passage.

McHale said Lowe is clearly a villain, yet has a charm and intelligence to him that has allowed him and his wife to, so far, slide past any criticism or the show’s allegations of serious wrongdoing. “I would love to talk to them more about it,” McHale says. “The more you peel that onion, there’s another layer of another layer.”

Other interviewees, including former zoo manager John Reinke, Joe Exotic’s former campaign manager Josh Dial and TV producer Rick Kirkham — who once tried to produce a “Joe Exotic” reality show — all still exhibit scars from their time in the orbit of Maldonado-Passage, damage that they share with McHale in the reunion special.

“I think a lot of people make fun of them and just go, ‘aren’t they crazy,'” McHale said. “But [Maldonado-Passage’s former husband] Travis’ suicide was one of the most shocking and tragic things I’ve ever seen on camera, or off-camera. I think it could become very easy to just make fun of people. But these are human beings. There were some real addiction struggles that were going on. I think it’s very easy to write those off. When I hear people go, ‘Aren’t the characters wild,’ I’m like, they’re human beings. They weren’t drawn. They’re real people.”

“The Tiger King and I” represented a return to Netflix for McHale, who previously hosted “The Joel McHale Show” for the streamer. It also coincides with the arrival of “Community” repeats, which started April 1 on Netflix. But McHale, known for his trademark humor and snark on shows like “The Soup,” said he wanted to play it more straight on “The Tiger King and I” — except when the subjects, like Lowe, required a bit of ribbing.

“This wasn’t showing a clip from a cake competition baking show and this was not just a sitcom or something like that,” he said. “I wanted to approach it as myself and having an actual conversation. I joke all the time, even during heavy conversations. It’s the way I kind of deal with things is with humor. But I didn’t want to make light of anything they were saying. But if Jeff was going to come on wearing an Affliction T-shirt, then I was definitely going to go for that.”

“Jeff’s nanny — that sort of thing is OK to go after,” he added. “But when the topics became more serious, I wasn’t at all going to brush over them or make light of them. I really wanted to see what has happened to them and how they felt. And I think you saw that with Josh Dial and Rick Kirkham, and you saw it with Reinke and Saff. You saw them hopefully be thoughtful and tell us what happened.”

As for the special itself, Joel Gallen — who just produced Fox’s “iHeart Living Room Concert for America” by similar means — sent iPads to the various subjects in order to capture them in 4K video. McHale was approached to host (which he did from his own couch) on a Friday, with an eye toward the production being done in less than a week.

“They didn’t want it to be a Zoom call,” McHale said. “They wanted it to look unique. Everybody shot themselves in 4K and then we called each other so we could hear each other talk and then we just talked into the iPads. That was the quickest way for it to get turned around and look like a decent show. I have to give it to Joel Gallen. Thank God for technology now. Without it, I would have gone nuts. But it allows stuff like this to happen.”

“Believe me, I was very happy to do it because the show is fascinating endlessly and I hear it’s quite popular,” he quipped.

As for what McHale has been doing in quarantine, he said he’s a judge for the Tribeca Film Festival’s documentary section, so he’s been watching plenty of those contenders. He’ll next be seen in the DC Universe series “Stargirl” (which will also air on The CW), and has a project that he’s putting together for Universal TV Studios.

And then, with “Community” receiving new attention via its Netflix streaming deal, there’s the ongoing question of whether the show will finally spawn a movie, as its “six seasons and a movie” prophecy once promised. McHale said he’s more optimistic than ever that it will happen.

“There’s way more rumblings than there used to be,” he said. “Alison [Brie] tweeted that she got a phone call from Sony. They still haven’t called me, maybe Matthew Lillard will take over. But I would say there’s a better chance than there’s ever been. … For a long time I was like, ‘never gonna happen.’ And now I think with the renewed interest, and I know the cast is interested, that it could happen.”