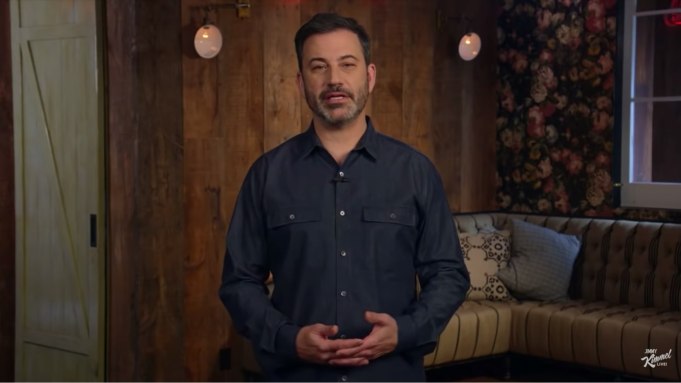 Jimmy Kimmel grappled with his own white privilege during the “Jimmy Kimmel Live” opening monologue. He revealed that the first time he heard the term he was “defensive” and misunderstood what it truly meant.

“To me, white privilege – was what Donald Trump had – a wealthy father – and a silver spoon in his mouth. It wasn’t what I grew up with,” said Kimmel. “So, I rejected it – because I didn’t understand what white privilege – meant. But I think I do now. I think I at least understand some of it – and here’s what I think it is. People who are white – we don’t have to deal with negative assumptions being made about us – based on the color of our skin. It rarely happens. If ever. Whereas black people experience that – every day. Every day.”

Kimmel then cited a recent incident during the worldwide Black Lives Matter protests where a Black store owner in Los Angeles was being handcuffed by police instead of the looters they flagged down for the officers to reprimand.

“Imagine how frustrating it must be to get handcuffed, or frisked, or pulled over, just because you’re Black,” Kimmel said. “Even if the cop looks in the car and goes, ‘Okay, everything’s fine, have a nice day.’ How do you swallow that and move on with your day? I don’t know about you, but that would make me furious.”

Then, he pointed to the death of George Floyd, saying that deaths under police custody happen often, even if it is not caught on camera.

“So if you’re wondering why people are angry, and why they can’t just march nicely in the street, holding up their signs in a single file line, maybe that’s why,” he said. “I read something last night that I think makes a lot of sense. It’s this: ‘White privilege doesn’t mean your life hasn’t been hard. It just means the color of your skin isn’t one of the things that makes it harder.’ Wherever you stand, I don’t see how you can argue with that.”

Several talk show hosts have been using their platform to directly address the world-wide discrimination people of color face daily. Stephen Colbert recently handed his time to Killer Mike and Trevor Noah released a powerful video about the dominos of racial injustice. Meanwhile, conservative radio pundit Rush Limbaugh recently revealed to the “The Breakfast Club” hosts that he doesn’t believe in white privilege.