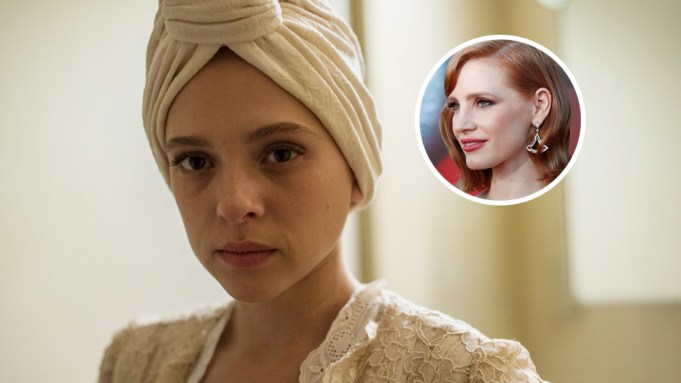 Onscreen, “Unorthodox” star Shira Haas breaks free of her restrictive upbringing to start a new life as an artist. Offscreen, she’s simply a breakout — as one the year’s most exciting rising stars.

The 24-year-old actress, who lives in Tel Aviv, portrays Esther “Esty” Shapiro on the Netflix limited series. She’s playing a story based on real life: As directed by Maria Schrader, with a largely female creative team and crew, “Unorthodox” is adapted from Deborah Feldman’s 2012 best-selling memoir “Unorthodox: The Scandalous Rejection of My Hasidic Roots.”

But within a version of Feldman’s story, Haas finds something entirely new. Her work brings to mind the naivety of Carey Mulligan in “An Education” and the harder edges of Jennifer Garner from “Alias.”

On a recent afternoon, Haas spoke on a Zoom call with Jessica Chastain, her co-star in the 2017 war drama “The Zookeeper’s Wife,” about the role, how she prepared and why the show has struck a nerve.

Jessica Chastain: I’ve missed you so much. Where are you right now?

Shira Haas: I’m in Tel Aviv. It’s morning for you, isn’t it?

Chastain: Yeah, in this strange time when morning will last 12 hours.

Haas: That’s how I feel. Every day is upside down, but hopefully it will pass, like everything else.

Chastain: I loved your show. We’re here to talk about “Unorthodox,” and I am so proud of you.

Haas: It means so much for me to hear it from you. I can retire. That’s all.

Chastain: Stop it. How long was the shoot?

Haas: We started in May last year. I came like two months before for some preparation, but the shooting itself was something like four months. It was mostly in Berlin, because they kind of faked the indoor of New York in Berlin in the studios. And all the outdoors we shot in New York for like a week, because you really can’t fake New York streets in Berlin.

Chastain: I don’t think you can fake New York anywhere. Were you familiar with the book it was based on before you got the script?

Haas: I knew it. I didn’t read it, but I knew about it, because it’s such a big best seller. And after I knew it was going to happen, I read it and it only took me a few hours, and then I read it again and again. And even though the TV series is so different, some of it is really inspired by it. I took as much as I possibly can from the book.

Chastain: What were the feelings that first came to you when you read the script?

Haas: I was amazed by it. First of all, it’s very rare to have an opportunity to play such a strong and complicated lead character. To Esty, every time someone asks if I’m similar to her, I’m like: “I hope so.” I think that when I was really young, I was very curious. I always had questions. For Esty, it’s also her curse, asking too much doesn’t fit in for where she belongs.

Chastain: How did the script come to you? Was it something that was out there that you knew about, that you fought for?

Haas: I’d been told that it was for a German TV series. No one mentioned Netflix. They tried to keep it a secret. They only sent me a few scenes. I loved it. The director and the producers came to Israel to meet me. I fought for it.

Chastain: See this is crazy, because I thought while I was watching you that you must’ve naturally spoke Yiddish. But that’s something you learned for the role?

Haas: Nada. My grandparents obviously knew it, but I never heard them talk. My parents were born in Israel, so they don’t know how to speak it. I didn’t know a word. It was a very long process. I had the most amazing teacher, Eli Rosen. I recorded him and I listened to it while I was cleaning dishes or stuff like that. I went to sleep with Yiddish and woke up with Yiddish.

Chastain: One thing I really want to talk about is that the series has a female creative team — the directors, writer, producers and more. Did that impact the series for you?

Haas: Of course. Our director, Maria Schrader, is also a great actress, so it was really helpful. The director was female, the producers, the creator, the camera crew; there were so many women in this crew, which unfortunately is so rare. It’s always nice to have it, but in this specific story, it’s a story about a woman who is trying to find her voice. You can really feel the sensitivity. I really felt protected with them. I felt like they listened to me.

Chastain: Having a set that had more women on it … I’ve worked on both kind of sets and done nudity. Did you feel also when you talked about feeling protected, did you feel like your nude scene that you had in this series, did it feel like a safer environment?

Haas: Yeah, that’s not something that scares me. But it is very important to me to talk about it. For me, it’s always important to understand what’s being seen. And the fact that it was Maria, and there were female creators, really helped me to be very open about what I preferred to show, what is less comfortable for me.

Chastain: In addition to all of the research you had done months before, was there any daily ritual that you did before you got on set to play her?

Haas: Before we started shooting, I asked for the costume designer for a few — they’re called tichale, the hats that you have when you are married. I would wear it a lot. It was something in Esty’s costume that could really bring the physicality of this character. Wearing it helped me find her movement. And music always helped me. Since she had a lot of flashbacks, it was very important for me to know the chronological way of scenes and the journey that she’s going through.

Chastain: It was very clear, when watching your work, how specific it was. I imagine it wasn’t shot like this, because things are never shot like this usually. But it felt like it was shot in chronological order.

Haas: No, no — not at all. On the last day, we shot by the lake. The first day was the shaving scene.

Chastain: What was that like? Because in a sense you’re shedding Shira, right?

Haas: This is so true. That’s one heck of an opening right at the start. But then I thought that it’s good not to wait for it. I don’t need to wait and be like, “Oh my God, in 10 days it’s going to happen.” It really made me very commit to the role. It was a hardcore start, but I really understood the character. It’s only like 20 seconds of a scene. But you really have almost all of her conflict — because she’s looking forward to her married life, and she’s really excited and happy. She’s also very scared and saying goodbye to her childhood.

Chastain: How does it feel that the show has been such a success on Netflix?

Haas: I always believed in the show, and I love my character, of course. But I was not expecting that. To have such a universal love from so many different people from the U.S. and U.K., and Argentina and Israel; it’s amazing to get that love. It’s amazing so many people have seen it. Even though I’m in my home all day, I can still really feel the love. And really, it’s amazing. I’m very, very, very grateful for that, really. I truly am.

Chastain: You blew me away in this series. You blew me away when we worked together on “The Zookeeper’s Wife.” From the moment I met you, I just thought, “This is a very important actress.” Should we talk about how we met?

Haas: It was love at first sight.

Chastain: It was for me. I heard about you from Niki Caro, our director of “The Zookeeper’s Wife.” She had talked to me about your performance, how incredible of an actress you are, how you had kind of created this instinctual, emotional energy around your character. I was like, “Oh great. I’m so excited.”

Haas: When was the first time — maybe like at dinner or something? I remember the first scene we shot.

Chastain: The first thing we shot, was it the scene when I give you the blanket?

Haas: Yeah, in the cages downstairs.

Chastain: I remember, and perhaps it’s good that we don’t remember the first time we met, because in that scene I’m trying to get you to talk to me, to open up to me. So I remember sitting there and studying you as you were doing that scene, and really seeing what an actress you are. In our profession, we’re thrown into these situations, with people we don’t know. You’re hoping that someone is going to bring something out in yourself, teach you about yourself, teach you about a scene in a new way. And you absolutely did that for me. Your work is profound. I knew it that day working with you for the first time. I see it talking to you, and I see it in all of your work.

Haas: You are so supportive and such a huge role model, but also a partner. And thank you for that. I mean, what the hell? You are the best.

Watch the full interview with Chastain and Haas above.