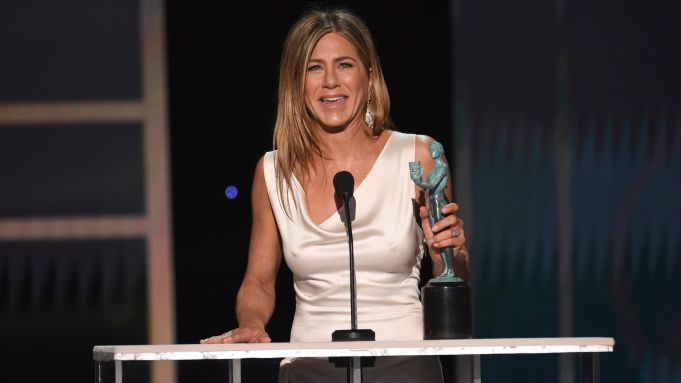 Apple TV Plus is on the board. The new streaming service won its first major Hollywood honor on Sunday, as “The Morning Show” star Jennifer Aniston picked up a SAG Award for best female actor in a drama.

The win capped a busy Sunday for the streaming service, which held its first-ever presentation at the Television Critics Association press tour earlier in the day. Aniston was even there in attendance at the Langham Huntington Hotel in Pasadena, promoting Season 2 of “The Morning Show,” before heading to the Shrine Auditorium and the SAG Awards.

“The Morning Show” had previously been nominated for three awards at the Golden Globes (for Aniston and co-star Reese Witherspoon, as well as best drama), while Billy Crudup won a Critics’ Choice Award for best supporting actor. But the SAG Award gives “Morning Show,” Aniston and Apple TV Plus major momentum as it enters what should be the most crowded Emmy race in history.

“I am beyond thrilled to see Jen recognized for her brilliant work,” “The Morning Show” executive producer Kerry Ehrin told Variety soon after the win. “She is a fearless, fierce dynamo and I am daily inspired by her. Brava, my dear Jen.”

It was the first individual SAG Awards win for Aniston, who also won in 1996 as part of the “Friends” ensemble.

Back at the Langham, where Apple TV Plus held an evening viewing party for the SAG Awards, the streamer’s staffers erupted in claps and cheers after Aniston’s name was announced. After the show didn’t pick up any Golden Globes, Aniston wasn’t expected to win the SAG Award (pundits, including Variety, predicted a victory for “The Crown” star Olivia Colman). Even she seemed surprised: “This is so unbelievable!” she said after climbing on stage.

“The Morning Show’s” Steve Carell and Crudup were also nominated, for male actor in a drama series, but likely canceled each other out, opening the door for “Game of Thrones” star Peter Dinklage. Dinklage finally landed the SAG Award for drama male actor after being nominated for the award six times in the past seven years.

The win caps a remarkable awards run for Dinklage, who won four Emmys for “Game of Thrones” as supporting actor in a drama. “Game of Thrones” ended last year, which means the eligibility window is now closed for future kudos.

On the drama side, Season 3 of “The Crown” picked up steam as Emmy campaign season begins, having won the drama ensemble award. It was Netflix’s only TV win of the night.

The other big winner of the evening? Amazon Prime Video, which led all outlets with three wins — including two for “The Marvelous Mrs. Maisel,” which won for comedy ensemble and for Tony Shalhoub as male actor in a comedy series. The streamer actually ran the table in comedy, picking up the female actor in a comedy award as well, for “Fleabag” star Phoebe Waller-Bridge.

“Fleabag” and Waller-Bridge dominated the Emmys and Golden Globes, but won’t be eligible for this upcoming Emmy season — leaving room for “Mrs. Maisel” to now ride that SAG Award momentum.

The “Mrs. Maisel” win was a bit of a surprise, given “Fleabag’s” recent awards dominance. “I voted for ‘Fleabag,'” quipped “Mrs. Maisel” star Alex Borstein. “This is really weird, this makes no sense.”

As for Waller-Bridge’s win, she now hit the Triple Crown: Emmy, Golden Globe and SAG Award in the same cycle.

In the limited series categories, both the male actor and female actor winners hailed from FX’s “Fosse/Verdon”: Michelle Williams and Sam Rockwell. Williams’ win also completed the Emmy/Globe/SAG trifecta, while Rockwell’s win was perhaps the biggest TV surprise of the evening.

Beyond Amazon’s three wins, FX and HBO (including a stuntwork win for “Game of Thrones”) scored two each, while Apple TV Plus and Netflix both won one.