Jeff Goldblum Discusses ‘The World According to Jeff Goldblum,’ Takeaways From ‘Sneakers’ Episode 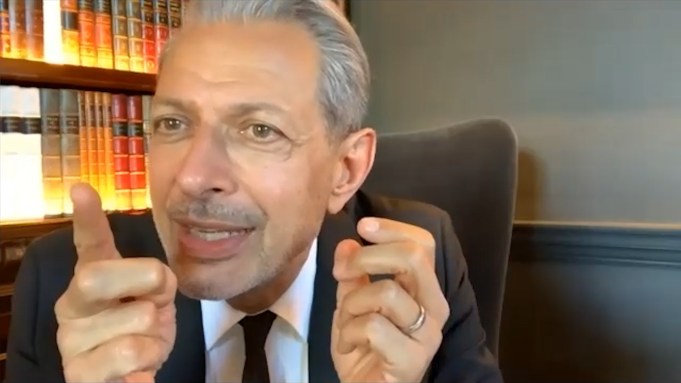 In National Geographic’s “The World According to Jeff Goldblum,” streaming on Disney Plus, Jeff Goldblum pulls the thread on deceptively familiar objects and unravels a wonderful world of astonishing connections and fascinating science and history.

Followed by an exclusive screening of the “Sneakers” episode, the “Jurassic Park” star joined Variety’s Michael Schneider in the Variety Streaming Room to discuss the making of and takeaways from the docuseries. He shared updates on a second season of the show and spoke of his other projects with National Geographic.

The “Sneakers” episode follows Goldblum’s investigation into the multi-billion dollar industry of sneakers. He starts off from the basketball court and later steps foot in the country’s sneaker convention, Sneaker Con. The show also introduces Dominic Ciambrone, who designs Goldblum’s shoes, as well as Adidas’ high tech sneaker lab.

Goldblum recalled meeting the wonderful sneaker maker who included the story of his uncle Chucky Goldblum, and designed the host’s custom shoes based on his uncle’s letterman jacket. He also spoke of his father who inspired his curiosity to explore the world around him.

When asked about these snit-bits from his personal life, Goldblum said the story came together “organically.”

“All through my life I kept — there were family albums that they, my parents, had and some home movies that you see snippets of here or there, just a couple of reels of those things that used to be silent in Atlantic city on vacation or data or the backyard and the swimming pool,” he said. “And part way through [production] I said, ‘I find myself talking about myself here and there, and I don’t know if you’re going to include any of that chatter in the cuts,’ which they did very cleverly all throughout, ‘but I have these photos and some of the footage, if you want them, take them all.’”

He went on to sharing the biggest surprises from the show’s first season — an environment-friendly denim production technique, ongoing ice cream socials and Jeff Goldblum tattoos.

“Oh boy, tattoos. That allowed me to go back to my hometown of Pittsburgh, as I’ve mentioned before, because one day a year they have in one tattoo parlor a ‘Jeff Goldblum Day’ where they’re only doing Jeff Goldblum tattoos,” he shared.

Goldblum also spoke of creating a National Geographic show that helped launch Disney Plus last year. “The World According to Jeff Goldblum” brought the streaming service its first Emmy nomination for outstanding hosted nonfiction or special.

“Here’s what happened when we started the show, to develop it, to make a good documentary series that we thought was worth our time, make something special, might be fun to do — turned out to be wildly fun,” he said. “It was going to be on the Nat Geo station, or if that’s what you call it, network, and halfway or part way through our experience, Disney Plus came out with that thing, and we became one of their family. And that whole thing happened. It was very thrilling.”

On the show’s second season, Goldblum shared the work in progress and teased the first episode on fireworks. Just before production closed down due to coronavirus precautions, Goldblum also spoke with an astronaut who has been in space.

“We had a little bit more to shoot, and then this whole thing happened,” he explained. “So now we’re talking about — and we’ve stayed in contact the whole time — and are talking about when and how and more excitedly than ever and enthusiastically than ever exactly how we’re going to go back just logistically and safely and when on the calendar.”

With the upcoming season, Goldblum hopes to bring people together and allow them to connect over common curiosities. He believes the show may reflect the “changing and changed world.”

“Maybe there’s a thread from accidentally what we happened upon in the first season, whereby it’s a people connector, some of these subjects, and our trust in each other, can’t be allowed to diminish,” he said. “It’s one of the things that allowed our species to flourish as it has.”