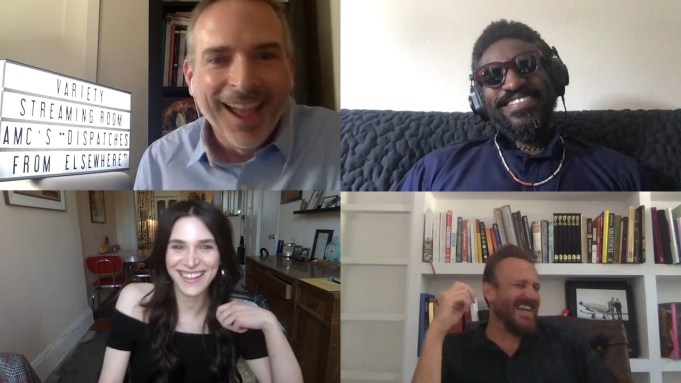 Jason Segel, Eve Lindley and André Benjamin joined the Variety Streaming Room for a Q&A after a screening of the first episode from their new TV series, “Dispatches From Elsewhere.” Moderated by Variety senior editor Michael Schneider, the stars discussed the making of the series, their connection to their characters and what they hope the audience takes away from the show.

“Dispatches From Elsewhere” was created by Segel and premiered March 1 on AMC. Based on Jeff Hull and Spencer McCall’s documentary “The Institute,” the show follows four normal people who discover an alternate reality puzzle and fall deeper into its realm while attempting to solve the mystery behind it.

Segel said he became fascinated with writing about the topic after watching “The Institute,” while preparing for his role as David Foster Wallace in 2015’s “The End of the Tour.” The documentary follows a 2008 alternate reality game set in San Francisco which amassed over 10,000 players in three years. In order to play the game, each player had to be “inducted” at an office building named the Jejeune Institute.

After hunting down the rights to the story from Hull and McCall, Segel had to go through the same induction as all other players. Segel said he was intrigued by the oddity of the game and the opportunity for nonlinear storytelling that it presented.

“[It was] really like the exact opposite of fight club,” Segel said. “People who felt like there should be more, ‘We’re getting together in the secrecy of night,’ but instead of beating each other up, they were making magic. It was like art as an act of defiance.”

Although he was originally writing the script as a movie, Segel later switched it to TV format so that the plot could focus more on the individual people playing the game, as opposed to the game itself.

“What hit me was that if I did this on television weekly and focused on the thing that’s interesting to me, which is who pulls a flyer and why, then I could make this about people instead of a fictional scavenger hunt,” Segel said. “I could make it about existential crisis.”

Because of the show’s people-centric focus, it was also important to Segel to cast actors who had a connection with the script and a message to convey through their character. He landed on André Benjamin as Fredwynn, Eve Lindley as Simone and Sally Field as Janice.

In order to portray Fredwynn, Benjamin said he drew inspiration from a variety of different people in his life, as well as conspiracy theorists.

“There are a lot of people like Fredwynn in the world that, they have all these conspiracy theories and they believe in these kind of wild things. And so it was kind of easy for me to pull from that,” Benjamin said. “And a lot of times on screen, I’m pulling from people that I know. I’m kind of just pulling little things that I see them do and kind of just making it to a meat patty of another person.”

To build the character of Simone, Lindley started with the stereotype of a “manic pixie dream girl” and added a unique twist.

Segel sought to have a stark contrast between the four characters in order to exemplify through their overlapping journeys that their are similarities between every human being.

“The show’s built on this premise, this sort of underlying thesis that really we are all much more similar than we’re being told to believe daily and that if we just opened ourselves up to one another, that would be revealed,” Segel said. “And all it takes is just a little act of faith to say, ‘This is who I am,’ and you will be met by your fellows who will say, ‘Hey. I’m just like that. I’m scared of the same thing.'”