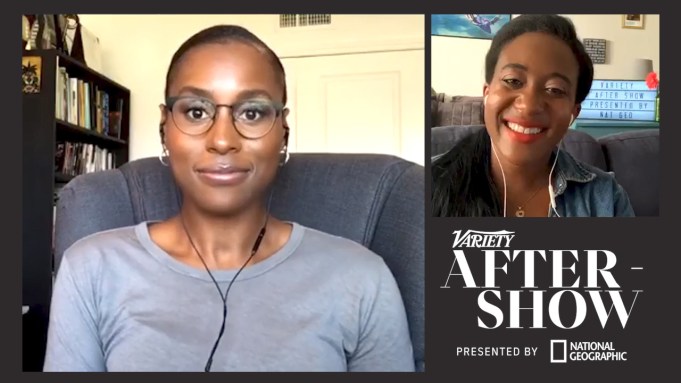 To say “Insecure” creator and star Issa Rae has been keeping busy while sheltering in place due to the coronavirus pandemic is an understatement.

“We just locked the finale which means, you know, we finished the sound mix I think last week. I think we officially submitted it and then we started the writers room (for Season 5) last week as well, so we are in it,” Rae explained, joining the “Variety After-Show,” presented by Nat Geo. “It feels really good to be back. And it’s like my only social interaction right now is just the weird virtual writer’s room. So that part is really exciting.”

After news broke earlier this month that “Insecure” was officially renewed for a fifth season, Rae posted a photo of the writers room (including executive producer Prentice Penny and writer/producer/co-star Natasha Rothwell) assembled on a Zoom video conference.

Explaining what it’s been like to plan the future of the show virtually, Rae said, “I think we have a really good room where people are very, like, sensitive to people speaking. We implemented a hand-raising policy just because. That’s the other hard part, like we’re such a jokey room, and it is hard to get in there with the jokes. So we’re finding our rhythm, but it’s still really fun.”

When asked if the coronavirus pandemic and the various shelter-in-place orders will play into the storyline of a show that uses Los Angeles as a central character, Rae says the team isn’t certain how they want to tackle the topic just yet.

“I already have fatigue of it because we’re living it and I think that’s my biggest worry is just, you know, I don’t want the show to feel dated and obviously certain aspects will already feel dated by nature,” she explained. “I think there might be a world where we acknowledge it in the background, because I think it obviously will have long-lasting impacts. But one of the saddest things is seeing how it’s affecting my favorite restaurants in South L.A., my favorite black businesses are being impacted and having to close shop, and so we don’t want to feel tone-deaf in ignoring it. We’ve always taken pride in representing the city as is.”

“And so, in short, I guess it depends on where we are, you know, six months from now when we shoot,” Rae added. “Obviously we have a schedule where we’re supposed to shoot, but who knows if we’re going to meet that. Who knows if we’re even going to be able to come out next year, so there’s just so many ‘if’ factors.”

For now, the focus is on the second half the HBO hit series’ fourth season. Episode 5, titled “Lowkey Done,” ended with the implosion of Issa Dee (Rae) and Molly’s (Yvonne Orji) friendship in the middle of the neighborhood block party Issa had spent the season organizing. The “Insecure” team teased a major falling out between the two friends during the season premiere, with the episode opening with a flash-forward to Dee saying “honestly, I don’t really f— with Molly anymore.” But when the pair found themselves dancing “The Wobble” midway through last Sunday’s episode, some audience members wondered if they might work things out after all.

“The Wobble doesn’t solve all problems, you know, contrary to popular belief,” Rae joked. “We just knew that we wanted to have something kind of a little bit deeper where Molly was concerned to have her unearth this and confront this issue with Issa, because we’ve been building towards this not only all season, but we’ve been thinking about [it] the entire series in the run of their friendship.”

“They are friends, they are real-life friends, but there exists a specific dynamic in their friendship that both of them have gotten accustomed to. They’re college friends who have taken on different paths. And we talked about, you know, post-college, Molly witnessed Issa being in this long relationship and this relationship that she may have aspired to, and I think, on Molly’s side, Issa has witnessed her take this journey to become this incredible lawyer. Like her career has always been in check and Issa admires her social life,” she continued. “I think they were used to that dynamic. And so, in this particular season, we’re seeing Issa pursuing a new career, a new passion and being busy and we’re seeing Molly try to flourish in this new territory and this relationship. [But] when you’ve seen one another stumble so many times, you kind of look at that friend with old eyes like ‘Okay, you’re trying to get into this relationship, but I know how you do and I can’t unsee that.’”

After Sunday night’s episode, social media was on fire with fans weighing in on who was more to blame for the blow up. Rae acknowledged “the passion on both sides” of the debate, adding, “I think Molly’s getting getting a lot of the unfair brunt of it, but I play Issa — I’m good.”

“I think I just want people to take a step back. I do think it requires a serious re-watch, and we’re not asking you to keep tally, but I don’t think that Issa is blameless by any means,” Rae said. “I think that there has been there’s been stuff building up and whether you think that’s the time or place for Molly to confront it, people have boiling points, and I think for her, it came down to this — [reasoning as Molly] ‘You don’t respect the boundaries that I set for myself, like I told you, this was a thing. I don’t care what you think about like how I felt, but I set this specific boundary, and I go above and beyond for you, I ride or die for you all the time. And I asked you this is the one limitation I placed on our friendship and you still found a way to go behind.’ And I think on Issa’s side, it’s like ‘Bitch, this is all I have and this flimsy Cheeto of a boundary, this Cheeto door lock boundary that you put up, like I’m gonna find a way around it, because I have to succeed.’”

While trying not to reveal spoilers for the second half of the season, Rae highlighted two episodes directed by co-star Jay Ellis (who plays Lawrence on the series and stepped behind the camera for Episode 7) and Kerry Washington (who helmed Episode 9). “She came and she did her homework. She took it so seriously, and I love her for it. I think the entire cast just got better because of her. And she’s just so fun to work with,” Rae said.

“Conversely, the entire cast got worse when [Ellis] started directing,” she joked. “But he was also a natural. It was our first episode out of the country and he had a lot stacked against him, but he just seamlessly stepped into that role and in a way that’s so exciting.”

And in terms of Issa and Molly’s relationship, fans will just have to wait and see how things pan out.

“I think you can expect these individual journeys,” Rae teased. “When you’re used to being friends with someone for so long, so much of your identity gets wrapped up in that and I think that exists for relationships in general. I think both of them needs to take a step back and and kind of examine ‘how did we get here? And who am I without this person?’”