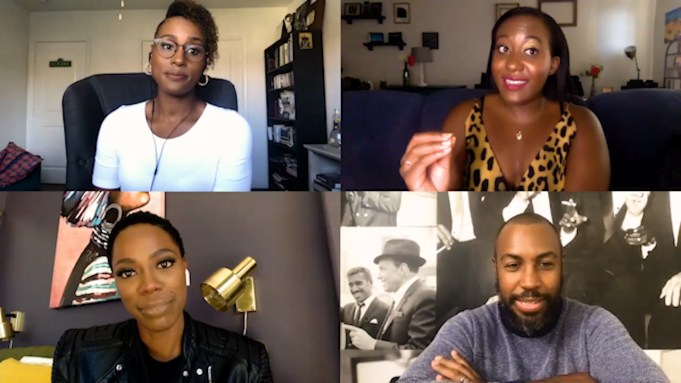 The creative team behind HBO’s hit series “Insecure” has a lot to celebrate at the moment: The fourth season of the comedy nabbed eight Emmy nominations, including best comedy series. And when creator Issa Rae, director Prentice Penny, actor Yvonne Orji and music supervisor Kier Lehman joined the Variety Streaming Room for a special conversation recapping the season, it’s clear that they’re ready to party.

“Obviously, the entire cast, we’re all super hyped,” Rae said of the Emmy love. “And of course this would happen when we all can’t be together and there is no ceremony.”

In addition to Rae’s second lead actress nod, the team is also celebrating first-time nominations for Orji and Lehman.

“I want a do-over,” Orji chimed in. “We’re going to have to redo this — all the parties. Invite us back next year whether we get nominated again.”

Penny added: “I feel like we should do what NBA does. I feel like all the Emmy nominees should just go to a bubble, just kick it in a bubble … for the next month. Just us, Brian Cox from ‘Succession,’ everybody hanging out.”

But all jokes about the virtual ceremony aside, the group acknowledges that the Emmy life represents the fact that voters and viewers have embraced the importance of the show’s central relationship between Issa (Rae) and Molly (Orji) and the work of both stars to drive it home. “Insecure” Season 4 also aired during the early days of the coronavirus pandemic, with many fans saying the HBO comedy series offered a nice reprieve from the real-life stressors of the time. Especially when viewers had onscreen drama to focus on as Issa and Molly’s friendship fell apart, with small slights leading to a big blow-up midway through the season, after which it was unclear if the two would ever be friends again.

The “Insecure” team crafted the storyline in a unique way, dropping a bombshell in the opening minutes of the premiere that Issa “doesn’t really f— with Molly anymore,” before going back to explain how the friends fell out. As showrunner, Penny detailed how the writers ratcheted up the tension leading up to that breaking point.

“Because we front-loaded it with a mystery, the audience, in a good way, was keyed in to want to see the clues,” Penny explained, highlighting the way story shifted between the points of view of the main characters for the early episodes. “We did it based on who we were ending the episode on. We wanted to plant this idea of like death by 1,000 paper cuts.”

The team also played with the timeline to add suspense.

“Every episode, it was like ‘How do we continue to dial it up past where it is?’” he continued. “And in a blessing, the audience on Twitter continued to ratchet it up by taking sides. … So in a good way it all kept feeding itself — I don’t think I anticipated on the social media side feeding itself — but it just helped create the pressure, more pressure in the pot.”

“That was a blessing for you?,” Orji jumped in, teasing Penny. “You allocated that as a blessing?” He answered: “I mean, we got the Emmys.”

In case you missed it, when it came to the audience picking sides this season, Orji bore the brunt of the social media hate for Molly’s “bad behavior,” while fans sided with Rae’s Issa Dee.

“I never really think about how social media is going to react to certain story lines because I feel like, we’re trying to integrate it and specifically trying to keep it clean and just trying to tell the best story. So, when I saw the response to episode one I was like, ‘Damn, they’re going really hard on Molly, they’re so smart, like they see where we’re going.’ I was like, ‘It’s going to be interesting to see what they think episode two. We got a little bit of leeway, but it was still like, ‘No, no. F— her.’ I was like, ‘Oh, this is intense,’” Rae recalls.

Rae also shared how the music of “Insecure” added to the tension of the storyline.

“This season was particularly unique where music was concerned because we got to do a writing camp this season. So we got to have artists create songs based on the themes of the show,” Rae said. “We got to tell them about the Issa and Molly tension but I also gave the directive of, [the songs] should not be on the nose. I’m not going to be like ‘B—h, I f—ing hate you.’ But I think we were gradual with it, especially the ending songs [of episodes one through four].”

In many ways, the music of “Insecure” serves as its own character. With Lehman at the helm to help the team find the music that suits the storyline best, he uses tracks to introduce new artists or incorporating Rae’s must-have throwback songs. One needle drop that got fans spinning this season was the use of Mya’s 2000 hit “Case of the Ex” — which hinted at the eventual, albeit short-lived, reconciliation between Issa and her ex-boyfriend Lawrence (Jay Ellis).

But the season ended with the Tyler the Creator track “Are We Still Friends,” which underlined the lingering questions about the future of Issa and Molly’s friendship as the two friends meet up at a restaurant to talk out their differences.

“He’s a quintessential artist for us,” Lehman added. “One of those artists that’s L.A., independent to the core, fresh, and representing this youth and new movement of R&B and the L.A. sound.”

“I try not to do songs that are super on the nose [but] it’s asking the question that we’re all wondering at the end of the season, ‘Are we going to still be friends? Are we still friends?’” Rae said. “It just felt perfect to be able to book end the season with Tyler — we opened with him and we got to close with him. Oddly enough I didn’t know it was going to happen, but I got to give him his Grammy for that album, so it was just all synergy.”

And though Issa and Molly come back to the table to wrap up the season, that doesn’t mean that everything will be smooth sailing for the best friends when the show returns for its previously-announced fifth outing, especially for Molly.

When asked what “Issa and Molly 3.0” will look like in Season 5, Orji said, “I feel our relationship is ‘iron sharpens iron’ — I feel like we’re sharpening each other as friends and even frenemies.”

“We’ve been circling around each other in just getting familiar with the old way of how we used to be. We’re all growing. And change is hard,” she continued, adding, “I would like to see Molly happy, in general, just happy. In love and life, at work, I want her happy. Is that too much to ask?”

But thinking back to advice Penny gave her at the beginning of the show, it might be too much.

“You said, ‘Happiness does not sell shows,’” Orji revealed, repeating the showrunner’s words back to him. “So she’s going to be messy and mad.”

As for Rae’s take on the friendship moving forward, she said: “It looks hopefully filming without masks. It looks like hopefully figuring out how to shoot this season. Can’t talk about Molly & Issa 3.0 when this virus is still out there, wear your mask people, please — and vote.”