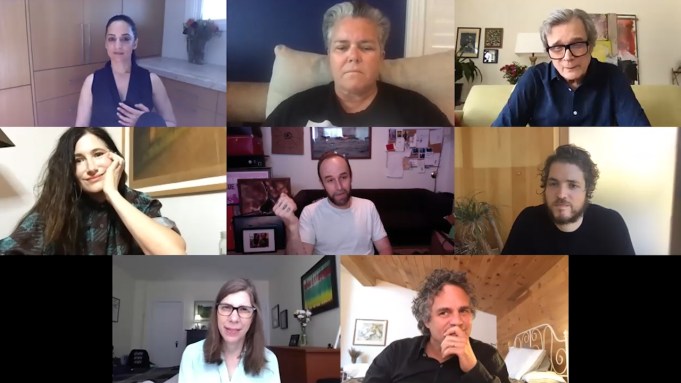 For all involved in the making of HBO limited series “I Know This Much Is True,” one word continues to come up when describing the filming process: generosity.

“I don’t think there was a cast member or a crew member that didn’t give everything of themselves. It’s their complete heart, soul, mind, spirit, body, health, everything,” Cianfrance said.

Based on the 1998 novel of the same name by Wally Lamb, “I Know This Much Is True” follows identical twin brothers, Dominick and Thomas Birdsey, the latter of which is a paranoid schizophrenic who has been in and out of mental hospitals for most of his adult life. As Dominick attempts to get Thomas out of an asylum, he relives their relationship and the family trauma they both endured.

With the subject matter came an intense artistic environment. In order to let the actors flourish, Cianfrance said he encouraged them to draw on their own personal family issues and lead with their instincts instead of closely following a script.

“The instigation I gave to all the actors is like, make it alive, make it real, make it true, make it messy, get it wrong, because maybe the wrong is going to be what I use,” Cianfrance said. “Maybe, you know, let’s not try to play for results. Let’s try to play for the pureness of the experiment.”

Ruffalo agreed, saying the personal experiences everyone brought to the show are what made it feel so real.

“All I can say is that this was one of the greatest experiences I’ve ever had as an actor, as a filmmaker, with this group of people who brought so much of themselves and the dignity and the grace in their own beings, their own experience, their lived experience to this project,” Ruffalo said.

O’Donnell, who plays social worker Lisa, said Cianfrance truly helped to foster an inspiring environment on set by trusting the actors to make their own decisions.

“I think what makes him so remarkable as a director is he genuinely trusts the actors and asks for what he needs in the most gentle and supportive way,” O’Donnell said. “It was by far my best experience of ever doing any kind of artistic project since I’ve been an adult. I felt loved and cared about.”

One way Cianfrance helped to kindle emotion was by hiring trained actors to full-on act during scenes involving Dominick and Thomas, who were both played by Ruffalo in the present-day and by Philip Ettinger in flashbacks.

“It was a stroke of genius because normally someone would be reading the lines off camera or you’d have a stand-in reading it,” Ruffalo said. “They’d do a serviceable job, but to bring a really great actor on stage who was so committed 100%… to play against was remarkable.”

Hahn, who plays Dominick’s ex-wife Dessa on the show, said everyone’s willingness to give, compromise and play off of each other greatly contributed to the authenticity of the project.

“I just keep thinking of the word generosity. I’ve never had an experience in my life that felt so generous from every department,” Hahn said. “The metaphor of being a supporting character never felt so true. My whole being just felt like I wanted to support this on a project level and on an actor level, just because of the material, because of what we were trying to say.”

Watch the full discussion below, moderated by Variety‘s Cynthia Littleton.