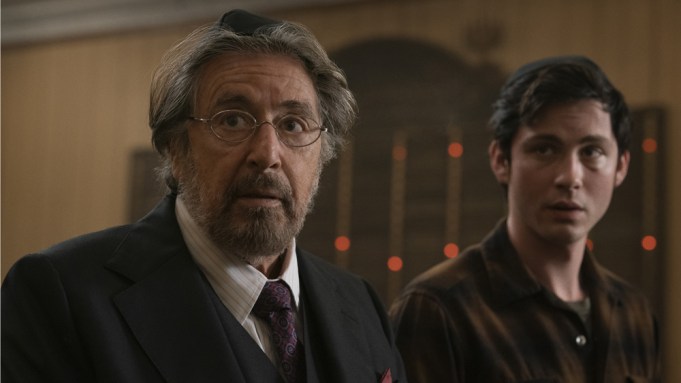 Amazon Prime’s new series “Hunters” has come under fire from the Auschwitz Memorial for being historically inaccurate, particularly by creating macabre games that take place in concentration camps.

The show’s creator David Weil responded to the criticism Sunday in a statement, explaining that “symbolic representations provide individuals access to an emotional and symbolic reality that allows us to better understand the experiences of the Shoah.” Weil pushes back against the idea that stories about the Holocaust should never be fictionalized, saying “It is not documentary. And it was never purported to be.”

The memorial’s Twitter account called a violent scene featuring a human chess game “dangerous foolishness” and a “caricature.” In the scene, which is depicted in the opening credits of all 10 episodes and plays out in the first episode, a Jewish chess master is held captive and forced to play a game of chess where the pieces are represented by fellow prisoners. A person is killed whenever the chess player loses a piece.

“Auschwitz was full of horrible pain & suffering documented in the accounts of survivors. Inventing a fake game of human chess for @huntersonprime is not only a dangerous foolishness & caricature. It also welcomes future deniers. We honor the victims by preserving factual accuracy,” the account wrote.

Auschwitz was full of horrible pain & suffering documented in the accounts of survivors. Inventing a fake game of human chess for @huntersonprime is not only dangerous foolishness & caricature. It also welcomes future deniers. We honor the victims by preserving factual accuracy. pic.twitter.com/UM2KYmA4cw

In a comment to another Twitter user, the memorial’s account said that it offers consultation services for shows and movies that want to portray scenes accurately, but “not many of them come for a consultation.”

Of course, For filmmakers, writers, journalists, artists… Sadly, not many of them come for a consultation.

Even though the show is a fictional story, the memorial called any falsification of real events “disrespectful and dangerous.”

In other words, you say: "a movie can lie about reality as it is just a movie'. Here we absolutely disagree. This is disrespectful and dangerous.

“Hunters” is set in 1970s America and follows a group of vigilantes as they hunt down underground Nazis and make them pay for their crimes. It stars Al Pacino, Logan Lerman, Josh Radnor, Jerrika Hinton and Tiffany Boone.

Years ago I visited Auschwitz and I saw the gates my grandmother was forced to enter decades earlier and the barracks she was forced to live in as a prisoner. I saw vestiges of the nightmarish world she had survived. It was an experience that forever altered the course of my life. It was the moment consecrated in time and memory that I sought to make good on doing my part – however big or however small – to ensure the promise of “Never Again.” I believed then – as I do now – that I had a responsibility as the grandson of Holocaust survivors to keep their stories alive.

While Hunters is a dramatic narrative series, with largely fictional characters, it is inspired by true events. But it is not documentary. And it was never purported to be. In creating this series it was most important for me to consider what I believe to be the ultimate question and challenge of telling a story about the Holocaust: how do I do so without borrowing from a real person’s specific life or experience?

It was for this reason that I made the decision that all of the concentration camp prisoners (and survivors) in the series would be given tattoos above the number 202,499. 202,499 is the highest recorded number given to a prisoner at Auschwitz. I didn’t want one of our characters to have the number of a real victim or a real survivor, as I did not want to misrepresent a real person or borrow from a specific moment in an actual person’s life. That was the responsibility that weighed on me every night and every morning for years, while writing, producing, editing this show. It is the thing I go to sleep thinking about and the thing I wake up working to honor.

In speaking to the “chess match” scene specifically… this is a fictionalized event. Why did I feel this scene was important to script and place in series? To most powerfully counteract the revisionist narrative that whitewashes Nazi perpetration, by showcasing the most extreme – and representationally truthful – sadism and violence that the Nazis perpetrated against the Jews and other victims. And why did I feel the need to create a fictional event when there were so many real horrors that existed? After all, it is true that Nazis perpetrated widespread and extreme acts of sadism and torture – and even incidents of cruel “games” – against their victims. I simply did not want to depict those specific, real acts of trauma.

If the larger philosophical question is can we ever tell stories about the Holocaust that are not documentary, I believe we can and should. HUNTERS, like a myriad of acclaimed films on the subject, does not always adhere to literal truth in its pursuit of capturing the representational truth of the Holocaust. My decision to fictionalize was made in awareness of this debate, and this show takes the point of view that symbolic representations provide individuals access to an emotional and symbolic reality that allows us to better understand the experiences of the Shoah and provide it with meaning that can address our urgent present.

I am forever grateful to the Auschwitz Memorial for all of the important and vital work that they do, for keeping the memory of victims and survivors like my grandmother, Sara Weil, alive.  I believe we are very much on the same side and working toward the same goals. And I hope we can continue a dialogue on how to achieve those goals.