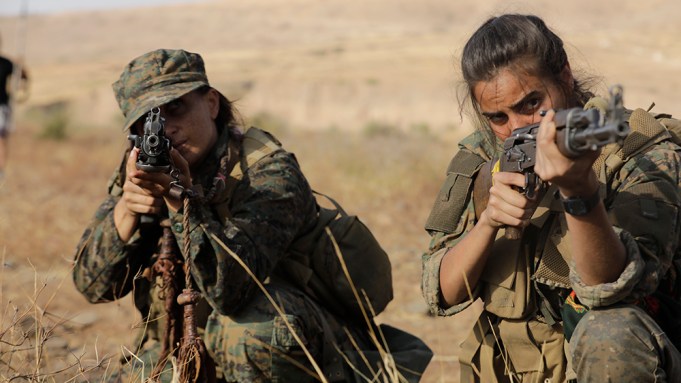 Hulu has dropped an action-packed trailer to “No Man’s Land,” an epic war series, love story and, above all, tale of personal odyssey.

Setting it apart, the eight-part series takes place against the background of the Syrian Kurd YPJ women’s militia push back against ISIS, a struggle featuring formidable female fighters.

A Hulu Original, set to bow in the U.S. on Nov. 18, “No Man’s Land” is created by “Fauda” and “First Flag” producer Maria Feldman as well as Eitan Mansuri, behind Omri Givon’s 2018 Canneseries best series winner “When Eagles Fly.”

In a pedigree creative package, the series is written by “False Flag’s” Amit Cohen and “Euphoria’s” Ron Leshem.

That is reflected in a multi-level series which is at once intimate drama and geo-political eye-opener, and spangled by set piece action scenes between the YPJ and ISIS, which make up much of the trailer.

In a first, protagonist Antoine (Félix Moati, “The French Dispatch”), a well-off Parisian construction engineer who has come to Syria to look for his sister (Mélanie Thierry, “La Douleur”), realizes he’s about to be sold to an ISIS unit as a hostage, only to be ambushed by a YPJ militia unit, led by Sarya (Souheila Yacoub, notable in Studiocanal’s “Savages”).

In such a painstakingly researched series as “No Man’s Land,” the YPJ-ISIS war comes across as often short, sharp ferocious skirmishes, expeditious – no prisoners are taken – unexpected, and where no amount of valor matches mortar fire.

Against such a background, Antoine falls for the YPJ cause and, (as seen in the trailer) for Sarya and finds his place in the world.

You’ve said that the idea for “No Man’s Land” came to you watching a TV report on the Syrian Kurd-ISIS war about ISIS troops believing that if they’re killed in battle by a woman, there’s no paradise, no 72 virgins.  In the Hulu trailer, the local ISIS warlord harangues his troops about this before battle…

Yes, the YPJ women in the TV report were so young, very beautiful, and didn’t seem scared by ISIS, actually making their presence known to the enemy by wearing colorful headscarves. I later realized that was exactly the point: They wanted ISIS to know that women are shooting at them. Back then, in 2013, I lived in Israel. We were all scared of ISIS, thought ‘OMG, they’re going to get to Israel.’ Then, thanks to the YPJ, they suddenly looked just plain stupid. And behind this is the larger fear of women, of femininity. I wanted to know more about these women.

One Hulu trailer scene features James Krishna Floyd (“My Brother the Devil”) as Nasser, a former British Army soldier and now Jihadist who, along with two childhood friends from South London, is fighting with the local ISIS forces….

Reading about the subject, I quickly discovered that the war’s very international: A lot of overseas nationals – Americans, Europeans – came to fight on both sides. So the conflict raised an immediate question: Why leave the West to fight in this war?

I grew up in the Soviet Union as a Jew, then moved to Israel where I was referred to as a Russian. Now I live in New York. The show turns a lot on identity and belonging.

Having seen just the first two episodes, I sense that many of the characters have significant back stories that still remain to be told: What persuaded Sarya to leave Paris and fight? Why is Antoine corroded by guilt at his sister’s guilt? Was her death in a Cairo bomb attack – if she did die – pure accident?

Every character has a highly developed back story which you may just glimpse in the earliest episodes. With the British Jihadists, we walked a fine line. Theirs is the story of lifelong friendship and betrayal. But through flashbacks to the men’s childhood in a South London council block, we really try to understand why they end up as ISIS extremists. There’s a lot of action in “No Man’s Land” but it’s a totally character-driven show.

The huge difference between “No Man’s Land” and “Fauda” and “False Flag” is “No Man’s Land’s” global financing. How has the global production scene changed your ambitions as a producer?

“Fauda” and “False Flag” were Israeli shows, made on Israeli TV budgets, which are very small. When I made them, Israeli producers’ and creators’ dream was to make an Israeli show and have it sold as a remake, like “Prisoners of War” becoming “Homeland.” With “False Flag,” which sold to Canal Plus, then Fox Intl., then Hulu, and “Fauna,” a Netflix pick-up, I realized I could target international audiences directly, and go straight to international partners and platforms. That was a revelation. As a real war film, “No Man’s Land” takes place in multiple countries, has an international cast. The difference is huge. It could only have got made with the right resources and international finance.