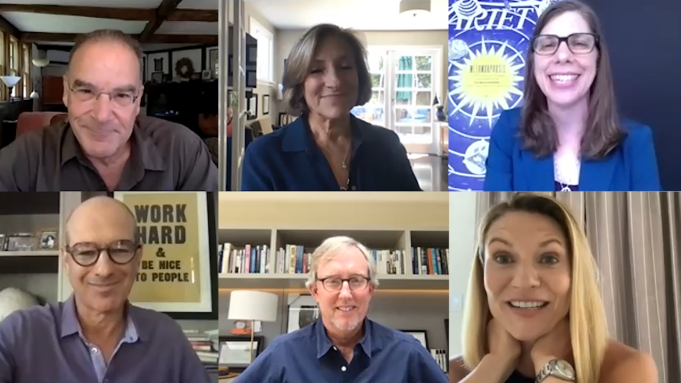 After a screening of the “Homeland” series finale, the show’s cast and developers joined a special edition of the Variety Streaming Room presented by the United Service Organizations, including a Q&A session with service members.

Show developer Alex Gansa didn’t have a solid plan of how the eight-season series would end until 72 hours before they filmed the final episode, but he found an unusual inspiration in whistleblower Edward Snowden.

“Snowden had divulged a lot of national security information and secrets, and had hightailed it to Russia, and had just published a book,” Gansa said. “And that image of his face on the cover of that book just kind of dawned on me in that moment, and I’m thinking, ‘Well, that’s exactly what Carrie Mathison should’ve been doing for the last two years. She should’ve been writing a book detailing her gripe with the Central Intelligence Agency.'”

With Carrie living in Russia, her and Saul’s relationship had disintegrated. However, Danes was quick to note the weight in Carrie’s decision not to perform the ultimate betrayal.

“Well, she does sever the relationship, but she doesn’t kill him. And it’s a really important distinction,” Danes said. “One we can forgive, another we can’t. And that’s interesting too. What is the bandwidth? How far can we push these characters and have them remain heroes?”

While filming the final episode, Patinkin said the responsibility of giving the show the right ending was heavy on everyone’s minds.

“When you’re telling a story, whether it’s for a two and a half hour play, or an eight year season of television or a film, how you end that story is that last moment that you walk away with,” Patinkin said. “Alex and the team understood the importance of that moment. And they refused to let it go until it was absolutely the best they could possibly make it, given the time constraints. And boy oh boy, it really taught me about writing, and about suffering for that possibility to show itself.”

The episode received rave reviews, but Gansa was unsure until the last moment that it was the best decision for Carrie and Saul.

“There were moments when I was watching the finale live with everybody else, where I was still worried that we had made the right call,” Gansa said. “Claire and I were talking about this a lot, just about the strategy of that last episode which was to really sever the relationship between Saul and Carrie, and then repair it in the coda. And watching the episode live, I became convinced about 45 minutes into the show that we had severed the relationship irreparably. And that our audience would not buy the fact that you could begin to repair it again.”

Although their characters were often at odds, Danes and Patinkin said they formed an unbreakable bond with each other throughout the show’s eight years.

“It’s just, one of the great times I’ve had working in my life with another human being,” Patinkin said. “And when it was over, and that voice came out, ‘Ladies and gentlemen, that is the last scene to be filmed between Carrie Mathison and Saul Berenson, Claire and Mandy,’ we found each other, we fell into each other’s arms and then we just started vibrating with tears and body weeping.”