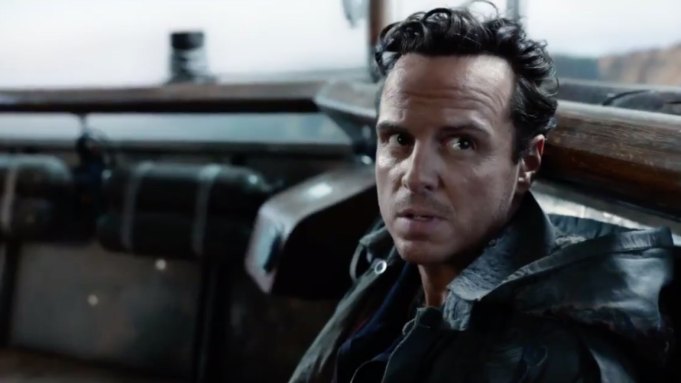 Lyra and Will are venturing into new worlds.

HBO unveiled the first trailer for season 2 of “His Dark Materials,” which played at the very beginning of the show’s Comic-Con@Home panel. The biggest piece of news to emerge from the panel, however, is that a “Fleabag” reunion is on the cards, given that Phoebe Waller-Bridge will voice the dæmon of Andrew Scott’s Colonel John Parry.

Many are doubtless hoping for the sake of irony that Waller-Bridge will play a fox, but in the books Parry’s dæmon Sayan Kötör takes the form of an osprey. Scott of course played the fox-averse “Host Priest” in season 2 of Waller-Bridge’s acclaimed comedy.

In revealing the reunion, Scott kept viewers on tenterhooks by saying that his dæmon would be played by “someone who is very close to me in my real life: a young performer and writer called Phoebe Waller-Bridge.”

“I’m really thrilled about that because it’s all about companionship and friendship and loyalty, and that’s what I feel about Phoebe in real life,” Scott added.

The trailer revealed Scott’s character for the first time, showing him to be more than capable with the subtle knife itself in his hand. Viewers also got a look at Lyra (Dafne Keen) and Will (Amir Wilson) meeting up for the first time in a strange new world.

As a quick refresher, season 1 ended with Lyra being betrayed by her father Lord Asriel (James McAvoy), who murdered her best friend Roger in order to use his dust to form a bridge to a new world. Understandably distraught by this turn of events, Lyra decided to follow him into the unknown, while her mother Mrs. Coulter (Ruth Wilson) opted to stay in her world.

Based on “The Subtle Knife” (the second novel in Philip Pullman’s “His Dark Materials” trilogy), season 2 will see Lyra arrive in a strange and mysterious abandoned city called Cittàgazze, where she encounters Will, the boy first seen in the human world in season 1, who is also running from a troubled past.

Watch the trailer for season 2 below:

One character who will not be appearing in season 2 is Lord Asriel. While that may not be hugely surprising given that he doesn’t feature in Pullman’s second book, executive producer Jane Tranter revealed during the panel that the intention had been to shoot a standalone Asriel episode. However, those plans were thrown off by the coronavirus pandemic. Tranter said that despite the setback, she doesn’t foresee the second season being delayed at this stage.

“We are currently, touch wood, completely on course for transmitting (season 2) when we would have transmitted,” Tranter said. “We were filming when the pandemic hit and we did have to stop filming…We had one standalone episode that we were filming in March, and it was separate from the other seven episodes because it was a standalone episode which Jack had written, with the blessing and with input from Philip Pullman, which looked at what Asriel had been doing between going through the anomaly at the end of season 1, and when we see Lord Asriel at the beginning of book three.”

“For us, it meant that we could continue post-production on the seven episodes that make up ‘The Subtle Knife,’ and just put the Asriel standalone to one side, and maybe at some point in the future we can revisit it,” Tranter added.

Earlier in the panel, Tranter and the cast discussed the pressures of bringing Pullman’s beloved books to the small screen for this adaptation.

“The most gratifying thing is that fans of the book have become fans of the television adaptation,” Tranter said.

Jack Thorne, who penned the entire series, described adapting the books as “the hardest job of my life.”

The original “His Dark Materials” trilogy is comprised of “The Golden Compass” (also known as “Northern Lights”), “The Subtle Knife” and “The Amber Spyglass.” Pullman has also written a prequel, “La Belle Sauvage,” and has embarked on a new book that picks up where the trilogy left off.