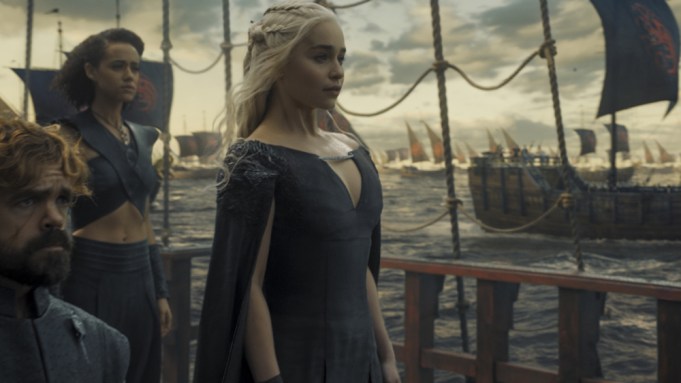 Hotly anticipated “Game of Thrones” straight-to-series spinoff “House of the Dragon” is likely to premiere in 2022, HBO programming chief Casey Bloys told Variety at the Television Critics Assn. tour on Wednesday, calling that his “best guess.”

He was not able to narrow down a more precise premiere date at this stage of development. No production dates have been determined yet. Co-created by George R.R. Martin and Ryan Condal, “House of the Dragon” is based on “Fire & Blood” and set 300 years before the events of “Thrones,” telling the story of House Targaryen.

As for the untitled “Game of Thrones” prequel pilot starring Naomi Watts, which HBO ultimately passed on, the cause of death was characterized as no singular thing.

“Pilots – sometimes they come together, sometimes they don’t,” said Bloys. “And I would say that was very much the case here. There’s nothing I would point to and say ‘Oh, this was the problem.’”

He added that Jane Goldman, who co-created the project with Martin, took on the challenge of world-building “beautifully.”

“That [prequel] was 8,000 years before the current show, so it required a lot more invention,” he said. “One of the benefits of ‘House of the Dragon’ is there was a text from George and there was a little bit more of a roadmap. [Goldman’s prequel] did have more challenges in terms of establishing a world, but I think she handled that beautifully… there wasn’t one glaring thing.”

And as speculation continues to roil over whether Damon Lindelof’s “Watchmen” could return for a second season, Bloys said he is giving Lindelof some space to consider his next move.

“Damon did such a wonderful job with this; I’m giving him the time to think about what he wants to do, and I’m really taking his lead on this. And he’s said publicly, if he’s got an idea, he’s willing to do it, but nothing has come to him, so I will just wait on him and see what he decides to do. I want to do what Damon wants, whether it’s another installment of ‘Watchmen’ or something else. Damon is who I want to work with. So I would love for it to be another season or installment of ‘Watchmen,’ or something else altogether, but it’s really up to Damon what he wants to do.”

What the premium cabler will do if Lindelof decides that he wants to move on from the series is “hard to know.”

Though “Watchmen” is based on the 1986 graphic novel of the same name, the HBO adaptation “is so much from Damon’s head,” said Bloys. “It’s hard to imagine, but let’s see.”

Meanwhile, ahead of the launch of HBO Max in May, Bloys addressed the idea that HBO’s curated identity as a prestige cabler may face brand dilution, essentially taking a wait-and-see approach to how consumers receive the new streaming service.

“You think about all of the disruption we’re seeing in the industry; [that’s] because the cable bundle is unraveling,” he said. “Even in that bundle, HBO was always positioned next to channels that may not have the same brand halo that an HBO does. In any media landscape, you do have to be part of a larger service or bundle. In this case it’s something that WarnerMedia owns and controls, so there is some benefit to that, in terms of trying to control and make sure HBO does have standalone identity and is treated like that.”