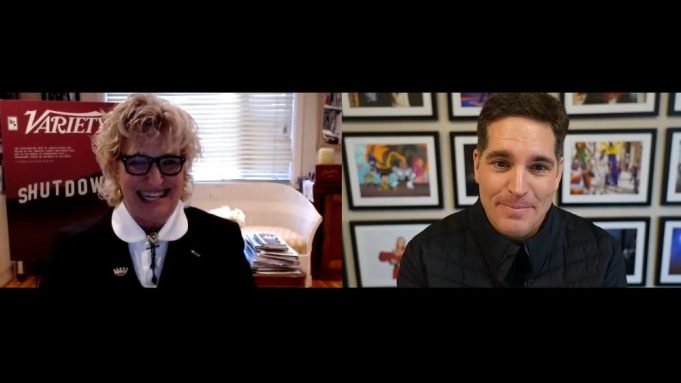 It’s an enormous bet that threatens to alienate Hollywood’s A-list, and it may well make or break HBO Max in the coming year. But WarnerMedia CEO Jason Kilar is vigorously defending the company’s plan to offer day-and-date streaming and theatrical releases for Warner Bros.’ 2021 feature slate, calling it a “defining moment” for a media giant that he thinks needs to make radical changes to thrive in a new era of entertainment.

“In order for this to work, either the box office needs to be there, or if the box office is not there, clearly HBO needs to carry some weight there,” Kilar told Variety editor-in-chief Claudia Eller during a wide-ranging interview Thursday at Variety’s annual Dealmakers event. He presented it as a pandemic-driven choice between the industry’s status quo and the needs of consumers who have clearly embraced on-demand streaming options.

“I feel very good about that because, if we’ve done nothing else, we’ve kept our ear to the ground in terms of fans and fan behavior,” Kilar said. “We’re cautiously optimistic…We’re going to be measuring this two ways, both box office and the subscription consumer behavior through [HBO] Max.”

Kilar vowed that the studio would renegotiate contractual terms with creative partners on the films “through the lens of generosity,” but he acknowledged after being pressed by Eller that he did not reach out to many key creative partners for the studio until after the bombshell announcement hit Dec. 3.

“We’re in the middle of a pandemic. I can’t wave that away,” Kilar said. “But in terms of how we’re trying to approach this financially and economically with the folks that we partner with, we are endeavoring to be generous at every turn.”

But the the combination of uncertainty and surprise has roiled the film community. The studio is facing threat of lawsuits from production partners like Legendary, and the ire of industry orgs such as the Directors Guild of America. Kilar said WarnerMedia and Warner Bros. executives have made outreach to as many as 700 people to discuss the plan.

“The vast majority of those conversations have been very, very positive because as people are able to hear from us, and to be able to be taken through it, and to be able to have questions answered, ultimately people feel good about that,” Kilar said. “We all want a healthy industry, we all want storytellers to be compensated fairly and ideally generously, and we ultimately want studios to be healthy, too. So this is all of us doing the best we can.”

Kilar emphasized that he is well aware of how important talent relations are for the studio amid the massive overhaul of executive operations, which came with more than 1,000 layoffs. Under AT&T’s ownership, the new focus on fueling premium film and TV productions to HBO Max is a big sea change for the studio’s strategy of assembling high-wattage projects that commanded top dollar from outside buyers.

“I see this as a defining moment for WarnerMedia. I really do because there’s a lot of spotlights on us right now and how we conduct ourselves,” Kilar said. “I feel very good about the steps we’re taking.”

That said, Kilar conceded that the changes and layoffs implemented at the former Time Warner divisions have been “incredibly painful” for the organization.

“It’s one of the darker days of my professional career with good reason,” Kilar said.

Eller pressed Kilar on the status of HBO Max and the bumpy start to engaging existing HBO subscribers after WarnerMedia launched the expanded streaming service in late May. Kilar said the pace of activation by HBO’s 30 million-plus subscribers is picking up.

“We’ve gone from from having 4 million HBO linear subscribers activate and spend time with the HBO Max environment, to then going to 8 million on a quarterly basis,” Kilar said. “We’ve grown 50% in just the last 68 days in terms of those activations of HBO linear subs. So when you look at those absolute numbers it’s hard to not be super-excited about it.”

As for the fate of the core HBO service, Kilar expressed confidence that the premium TV brand would thrive despite the upheaval behind the scenes and the heightened competition from Netflix and its ilk. He predicted HBO’s audience would grow over the next decade.

“We’re going to keep investing in it and invest in it more than we ever have before,” he said. Kilar also downplayed the suggestion that AT&T’s heavy debt load would limit its ability to write big checks for content.

“It’s not something that keeps me up late at night,” he said. “You’re looking at an organization that generates over $25 billion [annually] in free cash flow.”

On a personal note, Kilar described himself as “a kid from Pittsburgh” whose life was changed by his first viewing of “Star Wars” in 1977. “I’ve loved movies all my life, at least certainly since six years old,” he said. “That is a big part of who I am.”

That love of movies has made it frustrating for Kilar to see the anger stirred by the decision regarding Warner Bros.’ 2021 slate and the suggestion that it could deliver a mortal blow of the movie business.

“I’m a builder and a nurturer. I’m not a killer,” he said. “These are highly unusual times that we’ve got going on right now and we needed to make a decision about what were we going to do in the middle of a pandemic that is stretching a lot longer than any of us anticipated.”

Among other topics discussed during the 50-minute interview:

Kilar predicted that WarnerMedia will eventually get a distribution deal finalized with Roku. The maker of digital streaming devices has balked at WarnerMedia’s terms for adding HBO Max to its platform. “We do respect each other and we are having productive conversations,” he said. “I do have optimism that something gets done.”

Kilar stressed that WarnerMedia’s roster of linear ad-supported cablers — TNT, TBS, Cartoon Network — are not going anywhere in the near future despite the intense focus on boosting HBO Max. “We can walk and chew gum at the same time,” he said.

The long-term fate of the CNN Worldwide chief has been the source of industry speculation in recent weeks. There have been internal rumblings that Zucker is ready to move on after not landing the WarnerMedia CEO job. “’Tension’ would not be a word that I would use to describe his and my relationship,” Kilar said. “The two best things that ever happened to CNN were Ted Turner and Jeff Zucker.”

Kilar addressed plans for the launch of an ad-supported iteration of HBO Max but did not get specific on a timetable. He left no doubt, however, about his enthusiasm for the potential of the streaming platform. “The opportunity to go directly to consumers and to go global is one of the things that never existed in the history of media, but it exists today, and how privileged and lucky we are as an industry to be able to lean into that opportunity,” he said.

Watch the full keynote above.