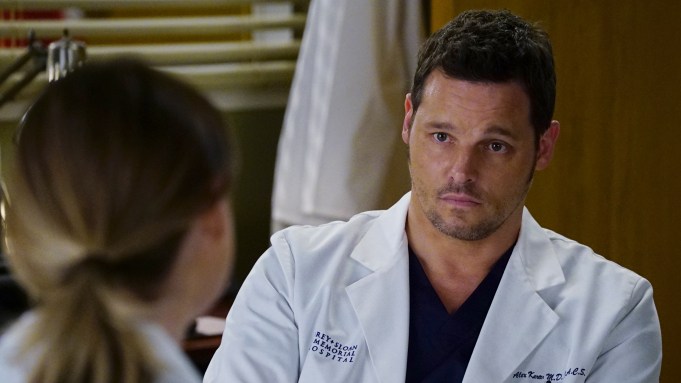 SPOILER ALERT: Do not read if you have not yet watched “Leave a Light On,” the 16th episode of Season 16 of “Grey’s Anatomy.”

Adios, Alex Karev. Justin Chambers has officially been written out of “Grey’s Anatomy.”

In the March 5th episode entitled “Leave a Light On,” Chambers’ longtime character revealed in a heartfelt letter that he has reunited with Izzie Stevens (Katherine Heigl), one of the original interns of the series and Alex’s ex-wife. In letters sent to his current wife Jo (Camilla Luddington), Miranda (Chandra Wilson) and Meredith (Ellen Pompeo), Alex explained that he found Izzie and learned that she had his kids. So he decided to stay and make up for the five years he lost with them by raising them now.

“It is nearly impossible to say goodbye to Alex Karev. That is as true for me and for all of the writers at ‘Grey’s Anatomy,’ as it is for the fans,” said showrunner Krista Vernoff in a statement. “We have loved writing Alex. And we have loved watching Justin Chambers’ nuanced portrayal of him. For 16 seasons, 16 years, we have grown up alongside Alex Karev. We have been frustrated by his limitations and we have been inspired by his growth and we have come to love him deeply and to think of him as one of our very best friends. We will miss him terribly. And we will always be grateful for his impact, on our show, on our hearts, on our fans, on the world.”

Alex had been off-screen since the Nov. 14 episode. The last few episodes featured explanations of his absence that included his onscreen wife Jo mentioning he wasn’t returning her calls. In “Leave a Light On,” Jo read the letter silently, as Chambers’ voiceover dictated the words for the audience.

“I’m sorry,” the letter began. “You deserve more than a letter. This cowardice, this letter, it’s officially the worst thing I’ve ever done. But it’s about me, Jo; it’s not about you. It’s not what you deserve. You deserve and have earned so much better than this.”

Scenes of Jo were intercut with a walk down memory lane for Jo and Alex, as well as Alex and some other pivotal people in his life, including his father and his newly-discovered children.

The letter said that Alex loves how “brilliant and brave” Jo is and how she made him better, or at least “kinder.” He wrote that he loves Jo, but that he’s also in love with Izzie.

“There was a part of me that always wondered, that always wanted to know, that always felt like we left things unresolved — unfinished,” he wrote of Izzie. “I reached out to Izzie and we started talking and it scared the crap out of me because it felt like no time had passed — like Izzie and I were kind of frozen together in time. And now, now we’re not.”

Izzie was “on a farm in Kansas, in this incredible place in the middle of nowhere,” he continued. And that’s where he was, too.

“Izzie had my kids, and I know you get what that really means. I know you of all people know why I can’t just leave now,” he wrote. “I have a chance to make this family whole, and I just hope you love me back enough to let me take it. I need to give these kids the family you and I never had.”

He also went on to tell Jo that he did mean it when he asked her to marry him, and she was not just the “let’s get a dog girl.” But the pull of having kids was just too much for him.

“I had this family I never knew I had on this insane farm, and I wished getting everything I always wanted didn’t have to hurt you in the process,” he wrote.

He concluded the letter by thanking her for taking care of him. He also said he signed divorce papers already and left her everything, including his shares in Grey Sloan.

“You deserve everything good in this life, Jo. I hope you find someone better than me,” he wrote, bookending the letter with another “I’m sorry.”

After Jo finished her letter, it was Miranda’s turn to read hers. In that one, Alex spent time telling her how much she taught him, even when it meant pushing his buttons. “Sure, it would be pretty great if I just stayed there forever and repaid you for everything you did to me,” he wrote, “but you and I both know I can’t. Never could. You helped me grow the hell up and took a bullet out of my stomach.”

He continued: “It took me a long time to say it but I’m a good ped surgeon. I’m an OK guy. I’m still trying. But I’m a really damn good surgeon,” he wrote. “You kicked my ass and asked more of me than anyone.”

While Jo cried in response to her letter, Miranda got mad. “It is a matter of grace that Alex Karev is who he is today,” she told her husband (Jason George). “He could have just as easily been lost to this world — aimless — but he survived his home, his family, his foster homes and became a man — now a father — a fine surgeon, by luck, by chance.”

The episode took a walk down memory lane with some of Izzie and Alex’s sweeter and more emotional moments, as well, including their wedding and her almost dying.

Previously, Vernoff told Variety that it was taking so many episodes to explain where Alex was because they wanted to do the story “very carefully.” Vernoff was not available for additional comment now, however.

Instead, Meredith’s voiceover at the end of the episode spoke for itself: “There really is no good way to say goodbye.”

Chambers was a part of the “Grey’s Anatomy” cast from the beginning. When the audience first met his character in the 2005 pilot episode, Alex was a surgical intern at the fictional Seattle Grace Hospital. As the years went on, the character rose in the ranks of the hospital, becoming a resident and then a pediatric surgical fellow. He also advanced personally, first with his marriage to Izzie, and then with his marriage to Jo.

Watch a retrospective of Chambers’ time on “Grey’s Anatomy” above.