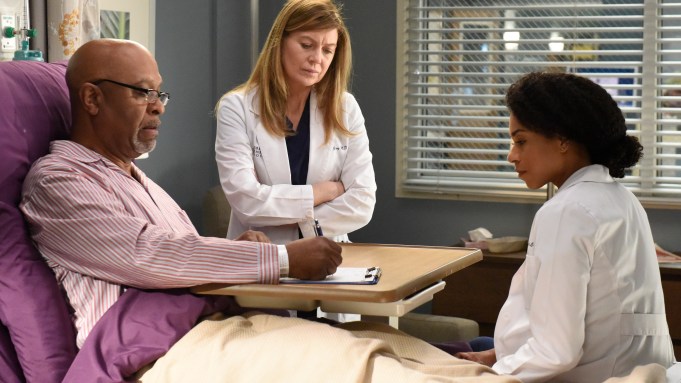 “Grey’s Anatomy” was forced to cut its season short due to the coronavirus pandemic, and the season 16 finale scored a decent audience given the circumstances.

The finale topped Thursday night with a 1.4 rating among adults 18-49 (the same score as last week) and 7.3 million total viewers, which represents the show’s largest audience since March 2019. Meanwhile its spinoff series “Station 19” delivered a season high 1.3 rating and a whopping 7.5 million viewers, its largest viewership tally ever. “How to Get Away With Murder” rounded off the night with a 0.6 and 3 million viewers, the same score in both demos as last episode.

Over on NBC, a Halloween heist episode of “Brooklyn Nine-Nine” ticked up fractionally to a 0.6 rating and 2.1 million total viewers. New episodes of “Will & Grace” and “Indebted” both came in even episode-to-episode, scoring a 0.6 and 2.7 million viewers, and a 0.3 and 1.4 million pairs of eyeballs respectively. The network’s lineup was bookended by “Superstore” and “Law & Order: SVU” reruns, which scored a 0.5 and a 0.4.

A new episode of “Last Man Standing” on Fox scored a 0.6 rating and 4.1 million viewers, down a tiny bit in the former metric. A replay of the Tim Allen series then delivered a 0.5 and 2.6 million viewers in the 8:30 p.m. time slot, followed by a “Mental Samurai” rerun with a 0.4.