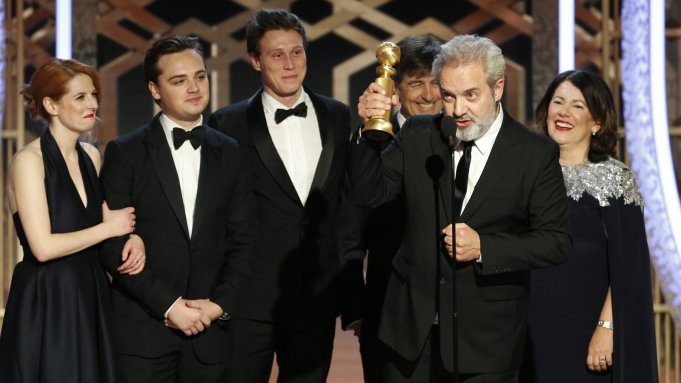 Ricky Gervais returned to host the Golden Globes for a fifth time last night, but the awards show slipped in the TV ratings versus previous years.

Last night’s awards ceremony drew 18.3 million viewers and a 4.7 rating among adults 19-49 according to Nielsen. That’s down a meager 2% on last year in total viewership and half a point ratings-wise. For comparison, last year the awards show ended up scoring a 5.2 rating and 18.6 million viewers, up a few percentage points from the 2018 telecast which drew a 5.0 rating and 19 million viewers.

However, that 18.3 million still represents the lowest viewership for the Globes since the Gervais-hosted affair back in 2012 which drew 16.9 million.

Sunday’s ceremony saw World War I pic “1917” and Quentin Tarantino’s “Once Upon a Time in Hollywood” win big in the film categories, while “Succession” and “Fleabag” took home the biggest prizes on the TV front.

Prior to the Globes, the NFL playoff game between the Philadelphia Eagles and the Seattle Seahawks ended 21 minutes before the Globes coverage began, compared to the meager six minutes between the NFL and the Globes last year.

ABC placed second on the night, far behind NBC, with a 0.6 average rating. “America’s Funniest Home Videos” led the way with a 0.7, followed by “Shark Tank” with a 0.6. Tiffany Haddish could be found DJ’ing next to Snoop Dogg at the Amazon Studios Globes after party last night, while an episode of her “Kids Say the Darndest Things” came in at a 0.5 and 3 million total viewers.

Finally on the CW, replays of “Batwoman” and “Supergirl” both scored a 0.1.