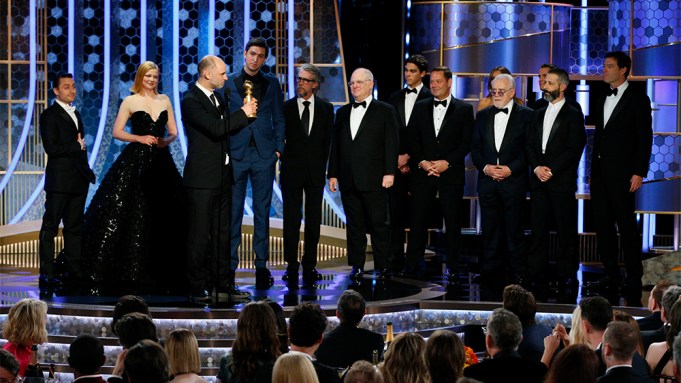 The Golden Globes definitely Golden Globe’d it on Sunday night with its TV picks — and that’s not a bad thing. Not only did Hollywood Foreign Press Assn. members live up to their reputation for awarding buzzy shows before the Emmys, but they also offered one or two absolute surprises.

It was another good night for HBO, which led all networks with four wins — thanks to best drama “Succession” and best limited series “Chernobyl.”

“See Ricky, it wasn’t all about Netflix,” quipped “Chernobyl” star Jared Harris, referring to host Ricky Gervais’ monologue jab that “This show should just be me coming out, ‘You win everything, Netflix. Good night.'”

Instead, Netflix picked up just one TV prize, for “The Crown” star Olivia Colman, an HFPA favorite who won the best actress in a drama Globe. (It was Colman’s third Globe win out of three nominations, which is about as close of a lock as you can get). But the streaming behemoth was actually beat out in the TV tally by rivals Amazon Prime Video and Hulu, both of which earned a pair of wins.

Amazon’s pair of Globes came for “Fleabag,” which repeated its Emmy wins for best comedy and best actress (Phoebe Waller-Bridge).

Hulu, meanwhile, won the very first Globe of the night — and perhaps the biggest surprise of the evening, at least among the TV categories: “Ramy” star Ramy Youssef’s win for best comedy actor. Youssef beat out last year’s winner, “The Kominsky Method” actor Michael Douglas, as well as Bill Hader (“Barry”), Ben Platt (“The Politician”) and Paul Rudd (“Living With Yourself”).

“Look, I know you guys haven’t seen my show,” Youssef said while accepting his award. “This means a lot to be recognized on this level.”

It was also a big win for Hulu, which has picked up a second season of “Ramy.” “His unique voice and storytelling brought a fresh new perspective to the screen that resonated deeply with millions of our Hulu viewers,“ said Craig Erwich, Hulu’s senior VP of Originals.

Hulu landed a second win for Patricia Arquette, another HFPA favorite who took the supporting TV actress Globe for “The Act” (which also previously earned her an Emmy).

But the most important wins of the night for HBO had to be for “Succession.” With “Game of Thrones” gone, the satirical drama is shaping up to be the pay cabler’s signature series.

This wasn’t the first opportunity for the Globes to honor “Succession,” but Season 2 of the sudsy media mogul series became such a pop cultural phenomenon that it was undeniable to HFPA voters. Besides naming “Succession” as best drama, the HFPA tapped Brian Cox (who plays powerful patriarch Logan Roy) as best drama actor.

The first season of “Succession” was nominated for a best drama Emmy last year, and the noise surrounding Season 2 helped secure creator Jesse Armstrong a win for outstanding drama writing (and main title theme). But now, the show is even more of a frontrunner when it comes to this year’s Emmys.

FX’s win was the sole victory of the evening for a basic cable network. HBO and Showtime scored five for pay cable, while Amazon, Hulu and Netflix combined for five for streaming. Broadcast networks were once again shut out — but that wasn’t a surprise, as they were completely ignored in the nominations as well.

Amazon’s comedy win for “Fleabag” repped the streamer’s fourth victory in the category since 2015 with “Transparent,” including “Mozart in the Jungle” in 2016 and “The Marvelous Mrs. Maisel” in 2018. Waller-Bridge’s win for comedy actress broke “Maisel” star Rachel Brosnahan’s two-year Globes streak, but still kept the award in the Amazon family.

Because “Chernobyl,” “Fleabag,” “The Loudest Voice” and “The Act” were all eligible for Emmys in 2019, ultimately the biggest 2020 Emmy impact out of this year’s Globes winners will be for “Succession,” as well as Colman and Youssef.