Brian Cox on His ‘Succession’ Character: ‘Rupert Murdoch Has F— All to Do With It’ 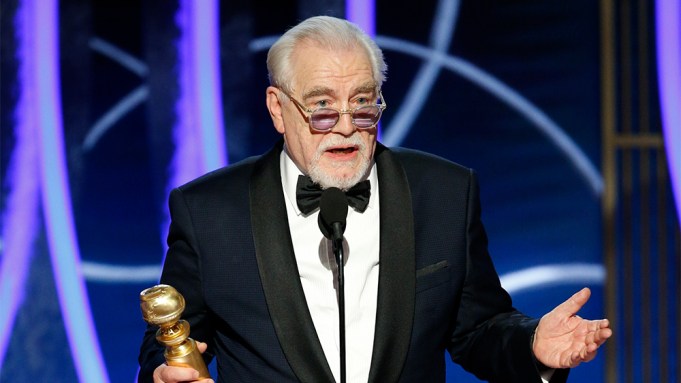 Brian Cox made a very Logan Roy entrance backstage at the Golden Globes when he entered the press room. “This is f—ing heavy” he muttered as he sought a resting place for his new trophy, fresh off his win for lead actor in a drama series for HBO’s “Succession.”

Cox was asked point blank if he is playing Fox baron Rupert Murdoch in the HBO series that revolves around a larger-than-life media mogul and his dysfunctional and at times amoral family. Cox shot back without hesitation: “Rupert Murdoch has f— all to do with it, and you can quote me,” Cox said, emphasizing that “Succession” is “totally our creation.”

Cox marveled at his good fortune in getting the meaty role of Roy at his age, after some 60 years in the industry. The stardom that he’s achieved since “Succession” has become a buzzy industry hit has been quite unexpected.

“I thought my sell-by date had come quite some time ago,” he said. “I’ve been doing reasonably well, I can’t complain” of his career before “Succession.” But, he added, “A role like Logan Roy comes along once in a generation. You go ‘Wow.’

Cox relayed a recent encounter he had at a cafe near his apartment in the posh Primrose Hill neighborhood of London that underscored how far and wide the show has spread. He said a man approached him to tell him how much he and his wife were enjoying the second season of the show, although he noted that his wife “finds it a little difficult at times.”

When Cox inquired as to why, he explained “My wife is Elisabeth Murdoch.” Shiv Roy, a “Succession” character played by Sarah Snook, is believed to be modeled on Rupert Murdoch’s oldest daughter.

Cox said he offered his apologies. According to Cox, Keith Tyson, who married Elisabeth Murdoch in 2017, said “it’s fine” but had one request: “Can you go easy on her next season?”

Cox, ever the consummate pro, made no promises.