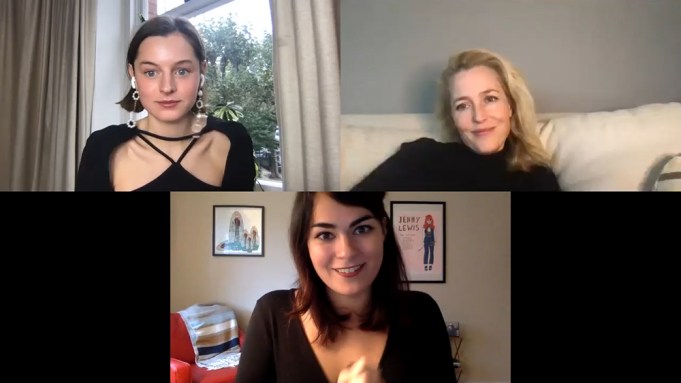 In its examinations of Queen Elizabeth II’s reign and the power players surrounding her throughout her life, “The Crown” has long brought viewers behind the British royal family’s gilded closed doors. But in its upcoming fourth season, which drops Nov. 15 on Netflix, the drama is tackling two of the most famous British women in modern history: Princess Diana and Prime Minister Margaret Thatcher.

The two existed in parallel but rarely crossed paths, and the same holds true for their story arcs on this season of “The Crown.” But for this year’s Power of Women Conversations, presented by Lifetime, Variety brought together Emma Corrin and Gillian Anderson, the actors tasked with portraying Diana and Thatcher (respectively) as not just iconic figures, but flesh and blood women. (This conversation also includes two exclusive first looks at Diana and Thatcher’s introductions on “The Crown.”)

Corrin, now 24 years old, has no living memory of Diana, for which she was ultimately grateful while playing the part. “In retrospect, I think it made it easier in doing this season, to bring my own interpretation to the character, to her,” Corrin says. Most of what she knew about Diana came to her in stories she heard from other people. “Growing up, my general impression was just how enamored people were by her,” she says. “I had a sense of the tragedy of what had happened to her, and also I suppose her spirit that people speak of — her being this very generous, empathetic person who broke the mold of the royal family.”

Anderson — who moved from the U.K. to the United States in 1979, the year Thatcher became prime minister — similarly was more aware of her character through other people’s “multi-faceted” impressions of the famously chilly, hyper-conservative politician. But “one of the things that I have found in playing historical characters is to put aside all preconceptions and opinions, particularly in regards to Margaret Thatcher,” Anderson says. “Because in making choices within scenes or within the arc of the series, one has to have a deep understanding of how they arrived to those decisions, how the character was able to take the actions and develop those attitudes and policies, in [Thatcher’s] case.”

“The Crown” approach to Thatcher, Anderson says, was to “get as much into her personal life and her relationship with her husband and her children as we do into her politics.” And even though Thatcher was both the U.K.’s first woman prime minister and deeply dismissive of feminism as a movement, this season does not, in Anderson’s words, “enter into the battle about ‘feminist’ or ‘not feminist.’”

“As far as [Thatcher] was concerned, she was just putting one foot in front of the other,” Anderson continues. “The conversation about feminism in her world probably wouldn’t have applied to her, I can imagine, given her mindset.”

On the other side of the spectrum is Diana, who is first introduced on “The Crown” as a shy teenager with a crush on a prince. Over the course of the season, however, she gets more and more disillusioned with the price of royalty and fame, and tries to find control wherever she can within her increasingly toxic marriage. The season also features several scenes of Diana secretly struggling with bulimia, a debilitating disorder that no one around her attempts to understand. “You can’t do justice to everything she was experiencing without including that,” says Corrin, who did extensive research on disordered eating and advocated for fleshing these scenes out even further than originally written. “It was so symptomatic of the emotional turmoil and all the suppressed emotions that she was feeling.”

Both Corrin and Anderson were grateful for the opportunity to portray these giants of British history, who happened to be women with very different ways of acquiring and using their power. When asked which other “Crown” character they would’ve liked to play, however, neither could resist one in particular.

“Margaret!” laughs Corrin. “But then I feel like Margaret and Diana are quite similar in some ways, in their personalities…and being a bit of a rule-breaker.”

“Margaret would be a lot of fun to play,” Anderson agrees. “She reminds me a lot of [‘A Streetcar Named Desire’s’] Blanche Dubois, who I played.”

Then again, Anderson allows, playing someone like the queen herself would be a wholly different kind of challenge. “I so rarely get to play anybody who doesn’t get opinionated and isn’t forceful, somehow. The fact that she is bound to serve and keep her feelings and thoughts to herself [is something] I struggle with, so I’m sure it would be fascinating to have to do that as a character.” She pauses, then smiles. “But yeah, probably Margaret.”