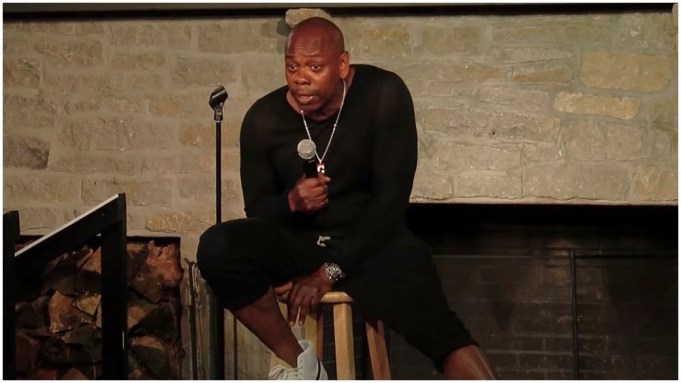 Dave Chappelle does not hold back in a new Netflix special titled “8:46,” which the streaming platform surprise debuted for free on its YouTube comedy channel late Thursday evening.

In a set rife with his signature searing social commentary, the comedian touches on everything from George Floyd’s death to being unable to accept a Grammy award on the day Kobe Bryant died, to the hypocrisy of conservative TV host Laura Ingraham — and even throws in a signature bit about Ja Rule for levity.

“It’s hard to figure out what to say about George Floyd, so I’m not going to say it yet,” Chappelle opens, flipping through a black notebook, later adding, “I got to tell you, this is like the first concert in North American since all this s— happened, so like it or not, it’s history. It’s going to be in the books.”

The special was filmed on June 6 in Yellow Springs, Ohio, with coronavirus-era social distancing guidelines in place for attendees, including face masks and temperature checks. The comedy legend had not performed on stage in 87 days until the special, though he has since performed similarly intimate gigs around the Dayton area.

In contrast to his opening remarks, Chappelle dives deep into topics of police brutality and Floyd’s death in the set. The Emmy winner also criticizes political commentator Candace Owens, saying, “I’d seen Candace Owens try to convince white America, ‘Don’t worry about it. He’s a criminal anyway.’ I don’t give a f— what this n— did. I don’t care what this n— did. I don’t care if he personally kicked Candace Owens in her stinky p—. I don’t know if it stinks, but I imagine it does. If I ever find out, I’ll let you know for sure. I’ll tell like Azealia Banks. I’ll tell.”

“8:46” references the length of time Minneapolis police officer Derek Chauvin held his knee against Floyd’s neck, ultimately leading to his death. It is also, as Chappelle reveals, the time of day he was born, according to his birth certificate.

The 27-minute video came with the disclaimer “From Dave: Normally I wouldn’t show you something so unrefined, I hope you understand,” with a link to the Equal Justice Initiative, a nonprofit organization aimed at ending mass incarceration and racial inequality. Its founder, Bryan Stevenson, was the central character in the 2019 film “Just Mercy,” starring Michael B. Jordan and Brie Larson.