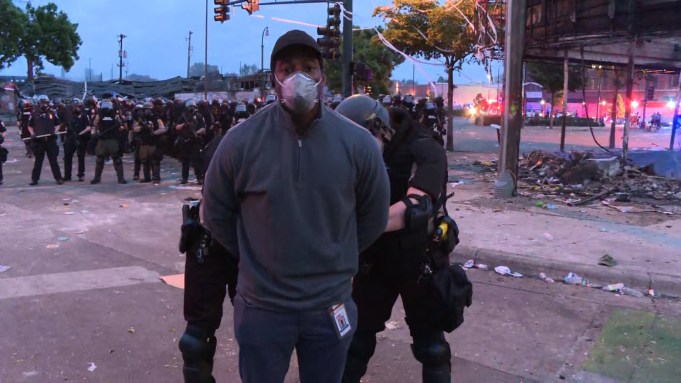 Police arrested CNN journalist Omar Jimenez and his crew on air early Friday during a live broadcast in Minneapolis, as they covered riots sparked by George Floyd’s death, sparking intense outrage as well as an apology by Minnesota governor Tim Walz to top executives at the cable-news network. CNN called the arrests a “violation of First Amendment rights.”

The correspondent was taken into police custody even though he identified himself, and his media credentials were clearly visible. Their camera continued to record during the arrests. By 7:40 a.m. eastern, Jimenez had been released and was back on air. Governor Walz told CNN he “deeply apologizes” and said the arrests were “unacceptable.”

“A CNN reporter and his production team were arrested this morning in Minneapolis for doing their jobs, despite identifying themselves – a clear violation of their First Amendment rights. The authorities in Minnesota, including the Governor, must release the three CNN employees immediately,” CNN said in a statement.

The arrest came even as a white CNN journalist, Josh Campbell, was covering the disturbances a block away. Jimenez, who CNN anchors said was both African-American and Hispanic, however, was detained.

The arrest of the CNN reporter is likely to exacerbate tensions sparked by the protests in Minneapolis, where participants overnight railed against the death of George Floyd, an unarmed African-American man, at the hands of Minneapolis police. Minneapolis police officers were seen in footage detaining Floyd, with one officer placing pressure on Floyd’s neck with his knee despite protests from Floyd and bystanders that he was having difficulty breathing.

The story has pushed news outlets to pivot from their coverage of the coronavirus pandemic, which has been all-encompassing in recent weeks. CNN, which has for several months aired a two-hour coronavirus “town hall” on Thursday nights in primetime in recent weeks, cut that program to an hour so that it could expand its coverage of the Minneapolis unrest. MSNBC and CNN both aired live coverage of events from Minneapolis overnight, when those networks typically air repeats of their primetime lineups.

Speaking on CNN Friday morning after being released, Jimenez said “there seemed to be some confusion” by police over whether he and his crew were supposed to position themselves. He said he and his crew had been in “verbal contact” with police in the area about how to station themselves for coverage. He suggested that a protester ran behind his crew, which put officials on edge and then prompted them to move toward him and his CNN team.

In a statement released Friday, Minnesota State Patrol said its troopers had arrested four people, including three members of a CNN crew “In the course of clearing the streets and restoring order at Lake Street and Snelling Avenue.” The CNN trio, MSP said, “were released once they were confirmed to be members of the media.” But CNN took issue with that characterization of events. “This is not accurate – our CNN crew identified themselves, on live television, immediately as journalists. We thank Minnesota @GovTimWalz for his swift action this morning to aid in the release of our crew.”

The Minnesota police action drew condemnation from the Reporters Committee for Freedom of the Press. “We strongly condemn the Minnesota State Patrol’s arrest of a CNN news crew covering the protests in Minneapolis, who responded professionally and appropriately to the situation. The First Amendment protects newsgathering, and prohibits the government from using police power as a pretext for interfering with press freedoms. Arresting journalists to prevent reporting on a public demonstration is not acceptable,” said Bruce Brown, the organization’s executive director.  “News coverage of protests like the one in Minneapolis is essential to informing the public and understanding the concerns of our communities. While we are relieved that the news crew was ultimately released, we expect the Minnesota State Patrol to provide a full explanation as to why these reporters, who identified themselves as journalists, were taken into custody.”

The ACLU also questioned the decision to arrest Jimenez. “Journalists should never be arrested in this country for doing their job. People are in the streets of Minneapolis demanding racial justice, and the public has a right to see it. Public transparency is absolutely necessary for police accountability,” the group said in a statement.

Jimenez is a Chicago-based correspondent for CNN who has been with the network, part of AT&T’s WarnerMedia, since 2017. He initially joined as part of CNN Newsource, a newsgathering unit that provides reports for affiliates, in 2017. He has reported from Paris to cover the recent fire at Notre Dame and from Las Vegas in the wake of a mass shooting there. Prior to joining CNN, he worked for WBAL in Baltimore, where he was a reporter and fill-in anchor. While there, he received an individual Emmy nomination for general assignment reporting. Jimenez began his on-air career as a multimedia journalist for WGEM in Quincy, IL. He graduated from the Medill School of Journalism at Northwestern University, where he also played on the varsity men’s basketball team.

The Floyd case has sparked protests in New York, Los Angeles, St. Louis and other cities. On Thursday night, at least 70 people were arrested at a protest that drew hundreds of people to New York City’s Union Square, according to WNBC-TV New York.