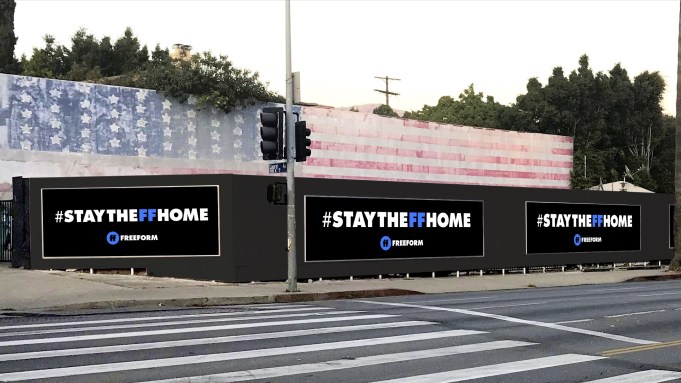 In order to promote health and safety guidelines in the wake of the novel coronavirus, Freeform is launching a multi-platform social distancing campaign called #StayTheFFHome, Variety has learned exclusively.

The goal of #StayTheFFHome is to encourage the Freeform audience to take state officials’ “safer at home” and “shelter in place” advisories seriously. To further entice young adults to hunker down wherever they dwell, Freeform has put together a special programming lineup to give them something to binge and will be running special PSAs on-air and across social media in which talent from the network’s shows talks about the importance of social distancing and flattening the curve. Additionally, Freeform will be branding billboards and other outdoor posters with the logo for the campaign.

“Freeform is a brand that is inherently built on taking a stand on issues our audience believes in — what is more important at a time like this than encouraging social distancing?” Tricia Melton, senior vice president, marketing, creative and branding tells Variety.

“We are keenly conscious that we are a young adult entertainment brand — not a news or health organization — but at a time like this, people are craving entertainment content as a release valve from all that is going on. We are leaning into that in the positive way; it’s our privilege to provide content — both programming and social content — that can give our audience a much-needed laugh, or connect with them in an emotional and relatable way.”

#StayTheFFHome aims to distract, educate and entertain fans while creating a sense of communal viewing. The idea for the hashtag actually came from “Motherland: Fort Salem’s “Taylor Hickson, Melton credits, who used it organically and caught the eye of those at the network. “We saw it and said, ‘That’s brilliant,” Melton admits. “Thus, a pro-social campaign was born.”

“We’re repurposing some of our existing paid billboards to support this important message,” she continues, “and inviting our talent to give their time, energy and platform to both influence and entertain our viewers in this challenging time.”

The programming lineup Freeform has put together for #StayTheFFHome includes an “Everything’s Gonna Be Okay” marathon on April 3, running the entire first season linearly from 5:30 p.m. to 11 p.m. This will also feature a live social “talkback” with creator and star Josh Thomas (and other talent to be announced) on Twitter and Instagram Live. The show will be available for free on the network website and app beginning that day, as well.

“The title of the show is hyper-relevant right now — so much so that we’ve seen the phrase ‘Everything’s gonna be okay’ — unrelated to our show — popping up as yard signs across the country. It’s a message that people just need to hear right now,” Melton says. “Laughter is a tremendous stress and anxiety reliever, and a smart, witty comedy about a unconventional family dealing with a crisis feels really relatable.”

Over the weekend, Freeform has programmed a “Chick Flick” marathon of movies. On April 4 beginning at 7 a.m., the network will run “Rock of Ages,” followed by “Miss Congeniality,” “Miss Congeniality 2: Armed and Fabulous,” “Dirty Dancing,” “Pretty Woman,” the original “Pitch Perfect” and “Keeping Up with the Joneses.” On April 5 those festivities continue at 7:30 a.m. with another showing of “Miss Congeniality 2: Armed and Fabulous,” followed by encores of “Keeping Up with the Joneses,” “Dirty Dancing, “Pretty Woman” and “Pitch Perfect,” and then at 8:45 p.m. “How to Be Single” will be added to the roster, followed by “Forgetting Sarah Marshall” at 11:20 p.m.

The following weekend will consist of a super hero movie marathon (not to be taken entirely literally but looking at characters who defy odds and do extraordinary things. This will begin April 11 at 7:30 a.m. with “Back to the Future,” followed by “Holes” at 10:10 a.m. and then continuing on to include Disney’s “Bolt,” the original “Jumanji,” Disney/Pixar’s “The Incredibles,” “Spider-Man: Homecoming” and “Marvel’s Guardians of the Galaxy.”

The weekend of April 18 and 19 is being dubbed “FunDay Weekend” and will feature films that have slight fantasy to them. Kicking things off is “What a Girl Wants” on April 18 at 7:30 a.m.; subsequent films in this lineup include (in linear order) “Grown Ups, “Charlie and the Chocolate Factory,” “Matilda,” “Despicable Me,” “Despicable Me 2,” Disney’s “Wreck It Ralph” and Disney’s “The Jungle Book” (the 2016 version).

Finally (for now), the last weekend to see this special programming is the last weekend in April. It will include the entire “Hunger Games” franchise of films and is therefore being called the “‘Hunger Games’ Weekend,” but that is far from the only programming the cabler has lined up. It all starts April 25 at 8 a.m. with an airing of “The Waterboy” and then continues into “Pirates of the Caribbean: The Curse of the Black Pearl.” “The Hunger Games” marathon begins at 1:15 p.m. and will feature the four films in a row.

“We’re in a relatively unique position as a young adult content brand to speak directly to our audience of Gen Z and millennial viewers,” Melton says. “We have a powerful social media brand and Freeform talent who are literally ‘in the demo,’ and they — like many Gen Z and Millennials — are passionate and involved in social issues and truly want to use their individual platforms for good. We are in this with our audience.”

See the full schedule of special movie programming blocks below:

Watch PSAs from Freeform talent above and below.