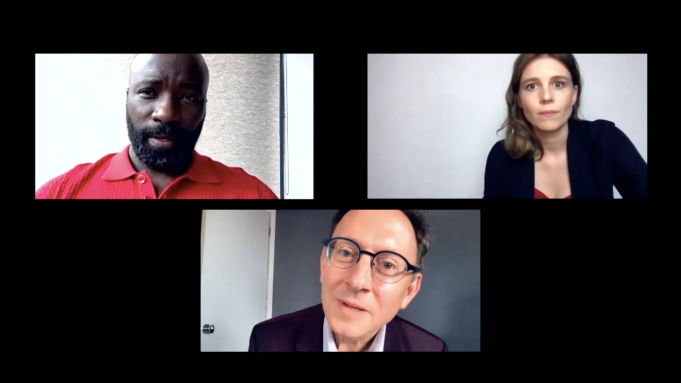 The three-minute trailer was created by executive producers Robert and Michelle King during the coronavirus-forced lockdown. Due to production delays, the team shared a special teaser for fans waiting for the upcoming season.

The clip sees returning cast members — Katja Herbers, Mike Colter, Aasif Mandvi, Michael Emerson, Christine Lahti and Kurt Fuller — in the comfort of their homes, emulating sound effects and narrating scenes that may or may not be a part of the upcoming season. Watch the trailer above.

The panel also featured a conversation on the season 1 finale which hints that Kristen Bouchard (Herbers) may have murdered her stalker. In the final moments of the episode, her friend David Acota (Colter) also has a vision of her walking toward the devil.

“David is definitely going to take Kristen’s character in a little differently because he knows that she doesn’t believe the same things that he believes, so they’re always talking on different wavelengths,” said Colter on how their relationship will change. “He respects what she brings to the table, but he does feel like the things he sees are legitimate. So how does he convey this to her? There’s so many things, but it’s going to give a lot of very interesting things for me to play with and I think for the scenes to have underneath it because we won’t necessarily be able to talk about all the stuff at once or ever.”

“Evil,” available to stream on Netflix and CBS All Access, is a psychological mystery that unravels the origins of evil along the lines between science and religion. It follows a skeptical psychologist who joins a priest-in training and contractor as they investigate a church’s unexplained miracles, demonic possessions and hauntings. Together, they must unpack the logical explanation on if something truly supernatural is at work.

Watch the panel below.