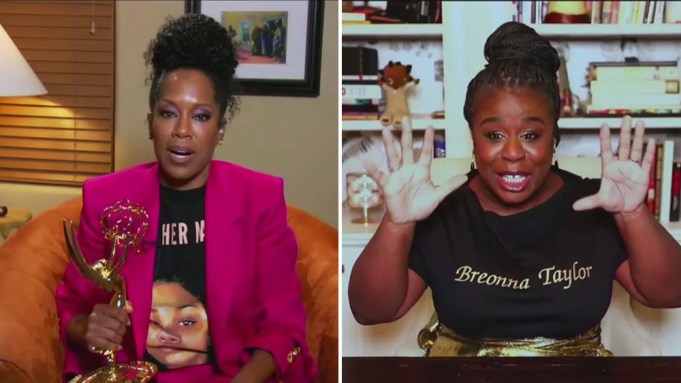 Backstage at the virtual Emmys ceremony, Regina King, fresh off her win for “Watchmen,” was asked about the shirt she was wearing under her bright pink suit that featured the image of Breonna Taylor, the medical worker killed in her home by law enforcement officers. King was one of several Emmy winners Sunday evening who used the platform to advocate for social justice and political action.

“The cops still haven’t been held accountable,” said King to the press after she accepted her award during the telecast. “She represents decades, hundreds of years of violence against Black bodies, Breonna Taylor does. I felt like wearing Breonna’s likeness, representing her and her family, and the stories that we were exploring, that were presenting, holding a mirror up to in ‘Watchmen,’ it felt appropriate to represent with Breonna Taylor.”

Her comments follow months of nationwide protests against police brutality and racism, spurred by the death of George Floyd at the hands of law enforcement. Demonstrations have continued to amplify calls for justice for Taylor and other unarmed Black people killed by police.

While on stage at the Staple Center to present an award, Anthony Anderson led a two-person chant of “Black lives matter,” asking host Jimmy Kimmel to say it with him “so that Mike Pence can hear.”

Several stars made statements through their wardrobe choices.

Justice Ginsburg, the second woman to ever serve on the Supreme Court, died Friday at 87 from complications from metastatic pancreatic cancer. Her granddaughter, Clara Spera, said days before her death, Ginsburg dictated a statement that her “most fervent wish is that I will not be replaced until a new president is installed,” according to NPR.

Her death has prompted an outpouring of remembrances of the fierce advocate for gender equality, and has ignited a political battle between legislators over whether a Supreme Court nomination should precede the presidential election on Nov. 3.

“On Friday, we lost a great American,” said Kimmel as he introduced a segment to honor those in the entertainment industry who passed away this year. “Ruth Bader Ginsburg was a compassionate and tireless champion of equality and justice, who said her legacy was to make life a little better for people less fortunate than she.”

“She is someone you want to say thank you to,” she said backstage. “It’s important to put into context the time in which these women are existing. We’re looking at revolutionary acts today in 2020 that surround women, women of color, and we are all mind-blown when we see these firsts.”

With the election at the forefront of many stars’ minds, several encouraged those watching from home to make sure their voices are heard at the polling booth in November.

In accepting the Emmy for his work in limited series “I Know This Much Is True,” Mark Ruffalo told viewers that “we have a big important moment ahead of us.”

“How are we going to heal and honor and take care of each other and our most vulnerable people?” he said. “We do that with love and we do that with compassion and we do that by fighting for them. And that’s what we have to do today. We have to come together with love for each other, and if you have privilege, you have to fight for those who are less fortunate, and more vulnerable, and that’s what’s great about America. Our diversity.”

Ruffalo added: “Are we going to be a country of division and hatred and a country only for a certain kind of people, or are we going to be one of love and strength and fighting for those, all of us — for all of us — who have the American Dream, and the pursuit of life and libertiy and love and happiness in this great country of ours? That’s what we’re facing right now. So get out and vote, and make a plan and vote for love and compassion and kindness.”

Dan Levy, in accepting the Emmy for the “Schitt’s Creek” win for best comedy series, urged viewers to register to vote.

“Our show, at its core, is about the transformational effects of love and acceptance,” said Levy. “And that is something that we need more of, now than we’ve ever needed before, and I just wanted to say for any of you who have not registered to vote, please do so, and then go out and vote because that is the only way that we are going to have some love and acceptance out there.”

Capping off the three-hour-long telecast, “Succession” creator Jesse Armstrong peppered a variety of “un-thank yous” in his remarks after the HBO drama nabbed the award for best drama series, President Trump and U.K. Prime Minister Boris Johnson each earned an “un-thank you” for their responses to the coronavirus crisis.

“Un-thank you to all the nationalists and sort of quasi-nationalist governments in the world, you’re exactly the opposite of what we need right now. And un-thank you to the media moguls who do so much to keep them in power. So, un-thank you.”

Additionally, “Marvelous Mrs. Maisel” star Rachel Brosnahan said that she and husband Jason Ralph are auctioning off their “fashion pajamas” for Michelle Obama’s When We All Vote initiative after the telecast.