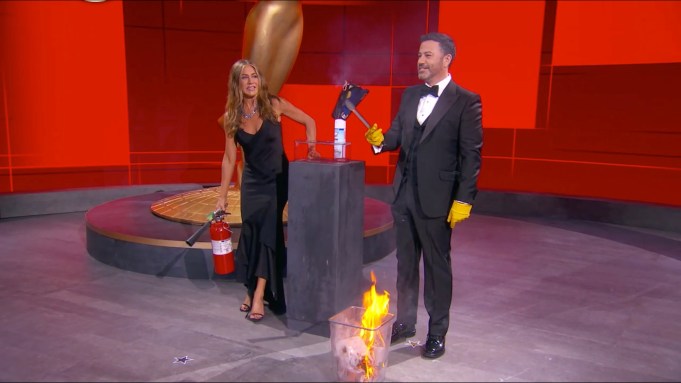 UPDATED: The Emmys have hit their lowest ever viewership once again.

Per the Nielsen Live+Same Day fast nationals for Sunday night, the awards telecast averaged just a 1.2 rating in adults 18-49 and 6.1 million viewers. That is a drop off of approximately 12% from last year’s low in viewership and a drop off of 25% in the key demo.

Last year marked a historic low for TV’s top awards show, as a host-less ceremony on Fox delivered a massive 33% decline from the year before, scoring a 1.6 rating and drawing only 6.9 million viewers. For comparison, the previous four ceremonies before that were watched by 10.2 million viewers, 11.4 million viewers (in both 2017 and 2016) and 11.9 million viewers. That 6.9 million figure was roughly one third of the total pairs of eyeballs the Emmys drew as recently as 2013.

Sunday night’s ceremony could have been a flaming disaster, but by and large Kimmel managed to keep things together (especially considering he was leading proceedings from an empty Staples Center) and ABC produced a coherent show despite all kinds of COVID-19 related barriers.

It has to be noted that the Emmys faced even stiffer competition than usual on Sunday night, as the show aired against both NBC’s “Sunday Night Football” and the NBA Playoffs on the East Coast in the primetime window for the first time.

There was also no red carpet lead-in this year to get the audience excited for the show due to COVID-19, which likely played some part in producing these low numbers. The previous two Emmys on ABC both had “Emmys Red Carpet Live” as their lead-in.

The biggest winner on Sunday night was undoubtedly “Schitt’s Creek,” which swept all of the major comedy categories, including outstanding series. HBO triumphed over Netflix in the overall tally, thanks primarily to “Watchmen,” which landed a whopping 11 total awards. One of the biggest surprises of the night came in the lead actress drama category, where Zendaya broke through for her “Euphoria” performance, beating out previous winner Jodie Comer and Oscar-winner Olivia Colman.

Elsewhere on Sunday, a thrilling NFL game between the Seattle Seahawks and the New England Patriots delivered 12.2 million viewers and a 3.5 rating in the early goings. While that obviously dwarfs the Emmys and pretty much everything else on the night, it does in fact represent around a 17% drip from last weekend’s “SNF” opener.