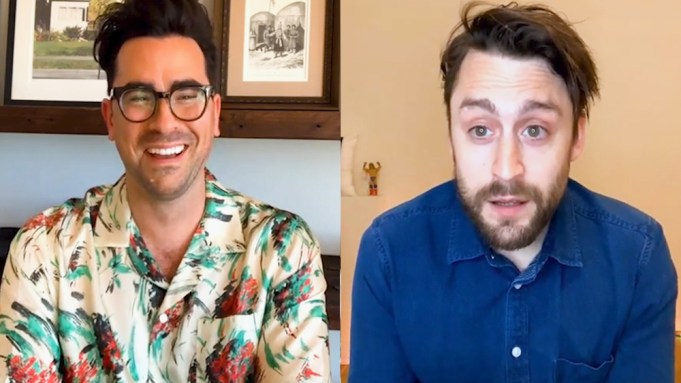 “Variety Studio: Actors on Actors,” Variety‘s biannual awards season offering, pairs actors who have delivered the best performances of the year for candid conversations about their craft and what really happens on set.

This year, 10 actors who participated in Variety‘s television issue received an Emmy nomination. Watch the Emmy nominated actors break down the 2020 performances that earned them the recognition from the Academy.

Both “Schitt’s Creek” and “Succession” cleaned house on Emmy nomination morning. The final season of “Schitt’s Creek” walked away with an astounding 15 nominations, including three for Levy (directing, writing and supporting actor). Meanwhile “Succession” clocked in with 18 nominations including a supporting actor nomination for Kieran Culkin for his role as Roman Roy. In Variety’s “Actors on Actors,” chat Culkin and Levy sit down to discuss that despite the immense differences between their show’s budgets, but find there’s still some similarities between these two aristocratic families.

Washington, who was nominated for actress in a limited series for her work on “Little Fire Everywhere, ” joined Sandra, who received a nom for her work on “Killing Eve,” for a fascinating discussion where Oh revealed she actually auditioned for the part of “Scandal’s” Olivia Pope for former boss Shonda Rhimes. And she really, really wanted the part.

Aniston was joined by former “Friends” co-star Lisa Kudrow to break down how she prepared for her character Alex’s big breakdown on “The Morning Show.” That Emmy-nomination worthy performance was inspired by the years of “rage” all women are carrying inside of them.

Youssef was nominated two times for directing and acting in his series “Ramy.” Plus, his second season co-star Mahershala Ali was also nominated for an Emmy for his role as Sheikh Malik. Watch Youssef reveal to Tessa Thompson how he cast the Oscar winner on his series.

Nominated for lead actress for her role as Rue on HBO’s “Euphoria,” Zendaya shared her time with MJ Rodriguez from “Pose.” Sadly, the second season of “Euphoria” is still in limbo but Zendaya was able to share her journey to discovering Rue.

Jackman was nominated for playing the real-life character Frank Tassone in HBO’s “Bad Education” — a part that he greeted a newfound sense of honesty. “I think as I’ve got older, I’ve got more brave in being honest about my fears and my insecurities,” Jackman told Anne Hathaway during their conversation.

“Watchmen” has the most Emmys nominations of any show this year with 26 total. And one of those noms goes to Regina King for her role as Sister Night. In her conversation with Reese Witherspoon, King discussed how real life revisionist history played a large part in the comic-inspired series.

“Normal People,” which was nominated for four Emmys, co-stars Paul Mescal, nabbed a nom for lead actor. In his “Actors on Actors” discussion, Mescal got into detail about the therapy scene that pushed many over the edge emotionally.