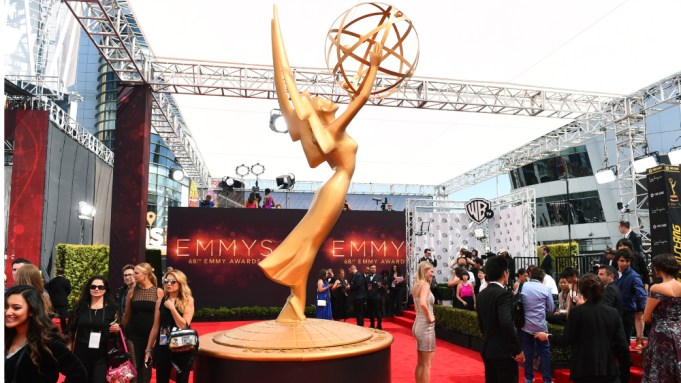 There’s no red carpet at this year’s Emmy Awards, but the show must go on. E!, ABC News, KABC and KTLA are among the outlets still producing red carpet pre-shows on Sunday — and all of them have found unique ways to do it.

“When we knew the Emmys were moving forward with their show, we knew that we would be there to cover it,” said Jen Neal, the general manager of E! News’ live events and digital, lifestyle networks.

KABC’s “On the Red Carpet,” which will also air on various other ABC-owned stations, airs Sunday at 4 p.m. PT and features George Pennacchio, Karl Schmid and Roshumba Williams; and KTLA’s three-hour Emmy pre-show, which starts at 2 p.m. PT, will be hosted by Sam Rubin and Jessica Holmes.

Of course, this year, instead of the usual routine of interviewing celebrities on the actual red carpet outside the Microsoft Theater, the Emmys pre-shows are looking to re-create the red carpet experience in different ways. KABC is shooting “On the Red Carpet” from its Glendale studios; ABC News will produce “Countdown to the Emmys” from New York (featuring Mike Muse and Variety‘s Elizabeth Wagmeister in the studio), with correspondent Chris Connelly and ESPN’s Kelley Carter live from outside of the Staples Center — where host Jimmy Kimmel will be based for this year’s remote ceremony.

E!, meanwhile, has built a stage on the Universal lot that it will use to also emulate the experience.

“They’re still the same shows that people are accustomed to seeing, but rather than being on somebody else’s set, which is usually what we do when we walk onto a red carpet or something like the Emmys, we built our own,” says executive producer Evan Prager of Den of Thieves, which is producing the E! shows. “We have created an environment that we think people will be accustomed to sort of seeing. It’s very reminiscent of a red carpet look and feel, not to say it’s a traditional red carpet. but we’re used to building sets and where we created a great environment for the show this weekend.”

The red carpet specials will still include plenty of talk about the nominees, as well as interviews with celebrities — but done remotely. That has actually allowed the shows’ producers to better plan out their “red carpet” specials, which normally are much more on the fly, as stars pop up unannounced and producers have to juggle the crush of talent as they head down the carpet.

“Our goal is to be live as much as possible,” Neal said of this year’s show. “We will be talking to a lot of stars and actors and celebrities at home, and bringing our audiences those conversations like we always have. We have a big slate of people we are talking to that want to celebrate one of the biggest nights in television, while also using our carpet and our hosts as the microphone to amplify the things that are important to them today [like] COVID-19, the election, Black Lives Matter and the projects they’ve worked on.”

Added Den of Thieves’ Jesse Ignjatovic: “Albeit the physicality of the show will be a bit different, the energy, the look and the language will be what the audience is used to seeing.”

The biggest adjustment may be how these red carpet shows cover fashion, which is usually a large part of arrivals coverage. John R. Green, executive producer of special programming for ABC News and executive producer for “Countdown to the Emmys,” said he’s aware that viewers expect “a certain amount of fairy dust” on these shows.

“We have some surprises about how we’re presenting the interviews and the look of the show is certainly going to have a lot of elegance and a lot of fun and a lot of sparkle to it,” he said. “We are going to lean in where it’s appropriate, on fashion when our guests pop up. We’re not going to go out of our way to dwell on fashion, because we want it to be about their performances and we want to stay in the moment. But I have a feeling that some of the nominees joining us are going to be making fashion statements. And I think that’s one of the things that’s going to pique the interest of viewers.”

And just like the Emmys telecast, which producers promise will come with some glitches, the live red carpet shows — which also will rely on beaming in talent live from their homes — expect a few mishaps. And they’re fine with that.

“I would say we always embrace that, that’s why we love live television,” said Ignjatovic. “As long as the technical side is there and working, that’s the bigger concern and area that we want to make sure that we’re on top of. But when we’re in talents’ homes, I think anything that can happen that’s out of the ordinary gives you those kind of live must-see moments. We’re all about that.”

Much like the Emmy Awards on Sunday, these virtual red carpet specials are a bit of an experiment — and Green pointed out how different this experience will be. “I’ve done a lot of big broadcast red carpets,” he said. “Four years ago, when ABC last had the Emmys, I was in Los Angeles outside the Microsoft Theater, doing a big splashy red carpet show with more than a dozen cameras and all the stars were walking down the red carpet. It’s just a reality of where we are right now. I don’t think it’s going to make it any less interesting or worse… all of us that work in live television have come accustomed to creating programming in the new way. Whether it’s having our hosts and anchors socially distanced, or it’s having big name celebrities join us for live interviews from their homes. We’ve gotten that down to an art form.”