‘Emily in Paris’ Renewed for Season 2 at Netflix 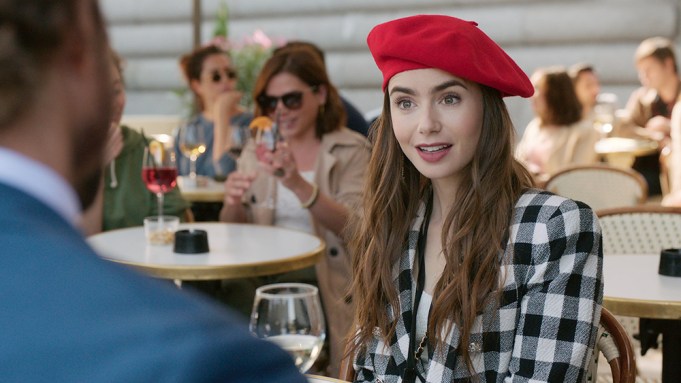 Emily Cooper is staying in Paris for a little while longer and maybe, just maybe, she might learn a few actual French words this time.

Netflix has renewed its wildly popular romantic comedy series “Emily in Paris” for a second season. News of the pick up comes less than two months after the show launched to quite the online stir and drew a somewhat sniffy response from French critics.

However, it has clearly been a strong performer for Netflix in the viewership département, breaking into Nielsen’s list of the top 10 most-watched streaming shows for the week after its premiere. To put its performance into context, it placed above the likes of “Grey’s Anatomy” and “Criminal Minds” for that particular week.

“Emily in Paris” follows Emily (Lily Collins), an ambitious twenty-something marketing executive from Chicago, who unexpectedly lands a job in Paris when her company acquires a French luxury marketing company. She is tasked with revamping their social media strategy, and embarks on a new life in Paris is filled with adventures and challenges, as she juggles winning over her work colleagues, making friends, and navigating new romances. The series was shot entirely on location in Paris and throughout France.

Prior to its premiere, series creator Darren Star (who is also behind “Sex and the City” and “Younger”) addressed how “Emily in Paris” portrays the culture clash that Emily struggles to come to terms with.

The series is produced by MTV Studios, Darren Star Productions and Jax Media. In addition to Star, it is executive produced by Tony Hernandez and Lilly Burns of Jax Media, and Andrew Fleming. Collins serves as a producer on the show.

News of the renewal was announced via a tongue-in-cheek fictional letter from Emily’s snooty Parisian boss Paris Sylvie Grateau (Philippine Leroy-Beaulieu) to her American boss Madeline Wheeler (Kate Walsh), which regrettably (or perhaps not) informed the latter that Emily will be staying in Paris “for an extended period of time.”

Read the full letter below:

Nous sommes désolées! We are writing to regrettably inform you that Emily Cooper will need to remain in Paris for an extended period of time. Despite her overconfident manner and lack of prior experience in luxury goods marketing, she has nonetheless managed to charm some of our hard-to-impress clients during her short time at Savoir. Call it bonne chance, or American ingenuity – I’m leaning towards the former – her results are impressive.

We hope that by extending her time in Paris, Emily will further the relationships she has already made, delve deeper into our culture, and perhaps pick up a few words of basic French.

We will work in conjunction with you on applying for a work permit on her behalf to prolong her time here. We love having Emily in Paris! But please don’t let her know that.