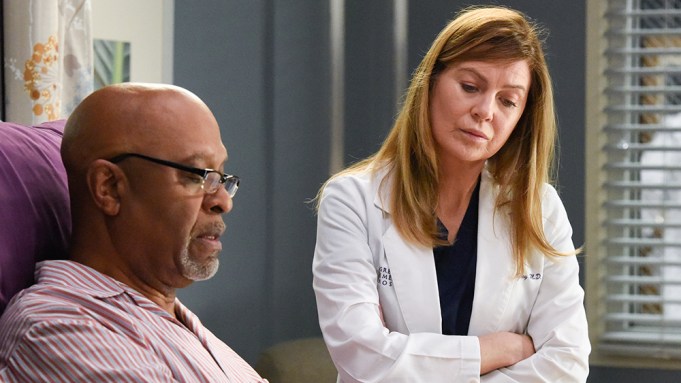 For 16 seasons, Ellen Pompeo has played Dr. Meredith Grey on “Grey’s Anatomy,” one of the most empowered heroines on network TV. The head of surgery at Grey Sloan Memorial Hospital has demonstrated poise during the most complicated surgical procedures and unthinkable tragedies, but last month the coronavirus brought production of her ABC medical drama to a standstill.

Like most TV shows, “Grey’s Anatomy” had to stop rolling its cameras in March for the safety of its cast and crew. As a result, the long-running series wasn’t able to film the last four episode scheduled for season 16. The last completed episode, which aired on Thursday, features Meredith and her colleagues saving the life of their longtime mentor Richard Webber (James Pickens Jr.) through a surgical miracle. It will serve as an end point for now.

On an Instagram live conversation with Variety, Pompeo spoke about the evolution of Meredith Grey, the recent exit of longtime cast member Justin Chambers and why she’s come to really appreciate the early days of “Grey’s Anatomy.”

Thursday’s episode of “Grey’s Anatomy” wasn’t meant to be the season finale, right?

Do you know if those four episodes will be filmed as the beginning of season 17? Or do you think they will be compressed?

I don’t know. As far as I know, our writer’s room is not up yet. Obviously, they can’t gather.

Did you have a favorite story line this season?

One thing that [showrunner] Krista [Vernoff] and I talk a lot about is, as subtly as we can on a network soapy drama, to call out our healthcare system and the problems with it. We were able to have a story line that dealt with a young, undocumented child not having health insurance, [and that] was a story line that Krista and I felt really grateful to be able to tell.

I know everybody’s not so crazy about it sometimes — and whatever, they don’t have to watch if they’re not crazy about it. But to touch on political issues like this is important. The human trafficking that was in last week’s episode to this mental illness story line with Giacomo Gianniotti, it’s really important stuff. I’m proud that we have such a platform to be able to tell these stories in an entertaining way, but subliminally drop in messages and bring issues to light that we think need to be had more light shone on them.

Do you think there will be an episode of “Grey’s Anatomy” that deals with the coronavirus?

I don’t know. I thought about it. Obviously, we don’t want to get too political here, but I was just watching the news and I saw clip of Barack Obama in 2014, saying that a pandemic was inevitable and that we should be prepared for it. And then in 2014, the Republicans were not granting him the budget, the access to put together what he felt like he needed to keep the American people safe, is how he put it in his words. So, in 2014, Obama was very well aware that this was going to happen and very well aware that we needed to be more prepared than we were at that time for it. The fact that five years later we’re not prepared, some people dropped the ball for sure. It’s disappointing.

You’ve been vocal on Instagram, celebrating doctors and nurses and encouraging people to stay at home. Do you have a message for our healthcare workers?

I have to keep reminding myself this every day, and I have small kids, and it’s really more challenging for the children to understand it because they don’t have the perspective that we have. But as hard as we think it is to stay in and not see our friends and not go out, even if the weather is beautiful, I get it. But my goodness, can you imagine having to suit up — hopefully suit up, hopefully you have the PPE to suit up — and walk straight into a hospital every single day and deal with sick person, after sick person, after sick person? We don’t know sacrifice. Sitting in our houses, being bored, not having anything to do, being alone and loneliness is a real thing, and I don’t certainly want to downplay that. And I don’t want to also downplay people financially struggling. There’s a lot of fallout from this in all areas.

Our healthcare professionals, the fact that they’re fighting this fight unprepared without the proper gear is really heartbreaking for me. When people are struggling, if you’re struggling, I think it’s always helpful to think of someone else and think of what you could do for someone else.

When did you first realize that people were going to medical school because of your portrayal of Meredith?

Did you always see Meredith as a strong feminist from the pilot in 2005? She’s become one of the strongest characters in recent TV history.

Thank you for saying that. I did recognize that the film roles that I was being offered at the time were all the girlfriends and sort of just the chick in the movie with not a lot to do. And [when] I read the pilot, I did recognize, “Wow, this is a female lead — with a career.” I wasn’t seeing many of those parts, so I did recognize that. But her journey to becoming powerful was not really so obvious to me. I have a different perspective, and maybe people see the beginning of the show as more empowering than I did. But that, “Pick me, choose me, love me” [line]; I was like, “Why am I begging a man to love me?” To me, that’s not empowering. Is that season two?

Yeah. that’s after Addison arrives, and we learn that Derek was married.

With television shows specifically, they don’t really know where they’re going. Shonda [Rhimes] definitely had an idea for characters and they have to have some sort of arcs, but I think that a show that runs for as long as “Grey’s,” the show has had to grow with the characters. I’m 15 years older now, so I’m so much stronger a person than I was then. It just evolves. The writers get to know you, they watch the dailies and they watch the show. “Grey’s” is so unique, because we’ve been on the air for so long, they’ve all watched me grow up. Shonda and the writers, we’ve all grown up together.

Last year, “Grey’s Anatomy” passed “ER” as the longest-running primetime medical drama in television history. Did you ever think that would happen?

No, I never thought it would happen because it wasn’t a goal of mine. Of course, I famously told the story about how I said I hate medical shows and I’ll never do one; they give me anxiety and I can’t watch, it turns me into a hypochondriac. I didn’t ever think that I would stay on the show this long. It happened, and here I am. It’s been this incredible platform for me and allowed me to stay home with my kids so much and not travel and have the circus life of an actor.

Are you still a hypochondriac?

I don’t know if it’s I’m a hypochondriac or if it’s this crisis that we’re dealing with. But every day I wake up and I’m like, “Do I have a sore throat?” I’ve been in my house for five weeks. Packages come to my house and my husband goes out to buy groceries. I’m like, “Keep the groceries outside and wipe everything down.” I might be getting on his nerves a little bit.

Do you have a place in your mind where Meredith goes in the final episode of “Grey’s Anatomy”?

No. I have no expectations and that’s how I survive.

Do you have an image of her final scene?

Not the final scene. The final episode I did, but I can’t really tell you because then I’ll have to kill you. Krista and I talked about potential things.

Do you have an end date in mind?

I’ve signed on for one more season is all I can say.

I wanted to ask you about Justin Chambers leaving “Grey’s Anatomy” last month, because that was a big moment for the show.

It was beautifully done. The writers did a fantastic job. We didn’t get to read that script. We all filmed our parts not having read it. We did not know because they wanted to be very confidential about that story line, and they didn’t want it to leak or get out. We all just read our parts on the day when we showed up. Debbie Allen directed it and she said, “You’re going to be doing this.”

I have to say, when I watch that episode and I see those early days of the show, I typically don’t watch the show. It’s too much. I film it, I live it, I’m too critical of myself. The show back then was just so, so, so, so good. I wish we had an appreciation for it then about how good it was. I don’t think we did, I don’t think any of us did. There was too much shit going on. It was too big, it was too hot, it was too fast and there was just so much going on in the beginning. It was more attention and more work than any of us had ever experienced or done in our life.

We were exhausted and none of us had had that kind of attention. I wish we had appreciated it for really how good it was, because — man, the show was fantastic back then. It’s almost like a different show now and it’s great for other reasons. But my point is, I’m happy with the way it ended because I think that Alex going back to be with Izzie [Stevens, portrayed by Katherine Heigl] is an homage to those first days of that show. The first six seasons, with that original cast, are just fantastic.

Watch the full interview with Ellen Pompeo above.

(This conversation has been edited and condensed for clarity.)