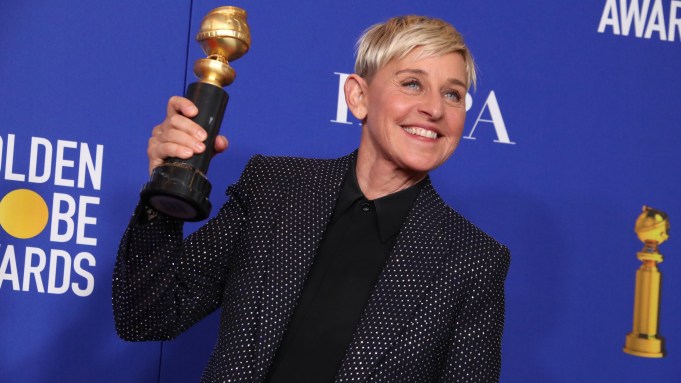 Ellen DeGeneres said she was grateful for the hard times in her life while accepting the Carol Burnett Award at Sunday’s Golden Globe Awards.

“I’m really happy for every single thing that happened in my life. I’m happy for the hardest times of my life. I feel like that’s what makes you,” DeGeneres said, referring to when she lost her sitcom after coming out as gay. “If everything’s easy you don’t have anything to compare it to.”

The legendary host praised past television stars and the impact they had on her career. In addition to lauding Burnett, DeGeneres thanked Lucille Ball, Mary Tyler Moore, Marlo Thomas, Dick Van Dyke and Bob Newhart, as well as citing the detective series “Mannix.”

“There is a little bit of all of them in me. That didn’t sound right,” she joked. “But you know what I’m saying. All I’ve ever wanted to do was make people feel good and laugh. There’s no greater feeling than when someone tells me that I’ve made their day better with my show or that I’ve helped them get through a sickness or a hard time in their lives. But the real power of television for me is that — not that people watch my show, but people watch my show and then they’re inspired to go out and do the same thing in their own lives, make people laugh or be kind or help someone less fortunate than themselves. That is the power of television. I’m so, so grateful to be a part of it.”

Backstage, asked how much the award meant to her, DeGeneres gave short but powerful response.

“As much as I don’t seem emotional, I’m deeply moved by this,” she said, pausing for a moment at the end her phrase.

DeGeneres was announced as the recipient of this year’s Carol Burnett Award back in November. The gong was created last year, with Burnett receiving the inaugural statuette. It is considered the HFPA’s television equivalent of the Cecil B. DeMille Award, which is handed out yearly to notable people in the film world. Tom Hanks was the recipient of the DeMille Award this year. DeGeneres was brought onstage by “SNL” breakout Kate McKinnon, who thanked DeGeneres for showing her that LGBT people could be on television.

DeGeneres also joked that the Globes would not play her off if her speech ran long since hers was a special award, so she launched into a very detailed story of her birth. She also made sure to thank her fictional husband Mark and their fictional children Rupert and Fiona.