Elle Fanning on Catherine the Great, Nicholas Hoult and Her Executive Producing Debut 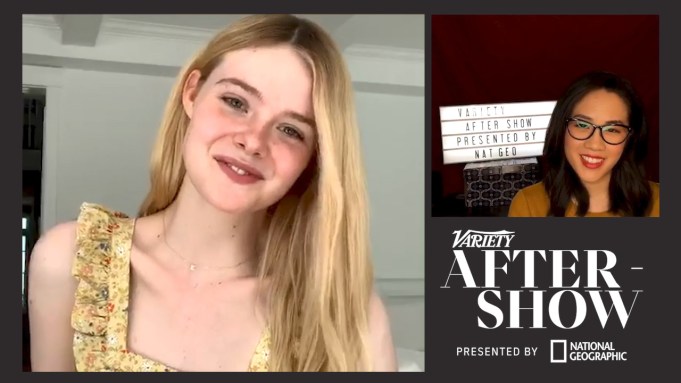 There’s something to be said, given all Catherine the Great did in her lifetime as the late 18th-century ruler of Russia, that the unfortunate bestiality rumor — you know, the one about the horse — remains.

“Fake news,” said Elle Fanning on the Variety After Show, presented by National Geographic, on Instagram Live. “It’s pretty sad [that] this extraordinary, almost — dare I say — first feminist icon has been reduced to this horse rumor,” she said.

Fanning plays the Russian empress in her new Hulu satirical series, “The Great,” which kicks off with Catherine’s arrival in the country to wed the mercurial, temperamental Peter (Nicholas Hoult). Her optimism about the union is quickly dissolved as Hoult’s Peter soon reveals his capacity for cruelty and selfishness, leading to her plans for a coup. The show, as Variety critic Caroline Framke puts it, “straddles the line between period drama and slapstick comedy with acrobatic ease.”

“We’re definitely in the pocket of that dark comedy, and [creator] Tony [McNamara]’s writing is so specific and witty and irreverent,” said Fanning. “It’s so fun to play with, but you have to get the tone right — especially the rhythm of the words needs to be at a certain pace. And I think it was so important for us — the whole cast is so gifted dramatically and comedically — so we were able to go back and forth and walk that tightrope.”

Fanning’s Catherine and Hoult’s Peter deftly trade barbs as she alternately pities him and plots the end of his reign. She and Hoult, who both got their start in the industry at a young age, work “in a similar way.”

“I don’t know if it’s because we were child actors but we have the same relationship to set and scenes, and we love to challenge each other,” she said of Hoult. “We’re just not embarrassed, which is good for scenes in this show.”

Among Fanning’s other primary scene partners on the show is Phoebe Fox, who plays noblewoman-turned-servant Marial, egging on the Russian empress to take down the petulant Peter. Fox and Fanning became fast friends over the course of the series.

“I love watching those scenes, because we got really close and I think you can see that dynamic on screen that we love each other so much and respect each other,” said Fanning. “She’s so feisty, and Marial is truly the one that’s pushing Catherine forward, because sometimes Catherine’s very unsure, and Marial’s there to give her the confidence.”

Though Catherine and Marial endure a range of cruelties and indignities, from back-lashings to obligatory heir-inducing sex to the general limitations of being a woman in the 18th century, “The Great” doesn’t dwell on long-suffering female characters.

“It’s funny talking about ‘strong female characters’ — sometimes I’m allergic to that term, because I don’t know what that means,” said Fanning. “Of course I think Marial’s strong, Catherine’s strong, but we all have our moments… I think TV especially has carved this amazing area for ‘Fleabags’ and ‘Killing Eves’ and ‘Russian Doll’ — to see these juicy women — but they have different sides, and they don’t always know the right answer. They’re not necessarily the bravest person in the room, either.”

Fanning’s version of Catherine starts out sweet but eventually comes into her own as a political and cultural catalyst for change, and it is those “girlish qualities” that make the Russian ruler “really strong, and get her through to the end.” Fanning’s Catherine “has a bit of an ego and an arrogance that I really love. I don’t know, I feel like I apologize for that. I feel like guys are allowed to have a little more ego than we are… But I think there’s something beautiful about Catherine that she doesn’t apologize for that, she just has this way and she always has a Plan B, C, D.”

“The Great” marks Fanning’s debut as an executive producer for a TV series. Having grown up on sets, she has been itching to get behind the scenes of a production. Feeling “very much like” Catherine as she was learning the ropes as a producer, Fanning recalled being on production phone calls and watching cuts and the “nerve-wracking” process of having to offer input on those edits.

“There’s a lot of execs, and it’s a big production, so I was trying to get my voice heard,” she said. “I think I grew in confidence with that, and realized that I have some good points and was able to speak up on those phone calls as it went along. When you’re a part of it and you’re so passionate about it, it just makes it all the better. You want to watch every edit, you want to listen to every music cue, you care about it so much when you’re with it from the very beginning.”

Part of her executive producing role included two days in about seven pitch meetings around town, meeting with various streaming services to hawk “The Great.”

“That was new,” she laughed. “Sometimes you’d walk in, there’d be a lot of men in suits. You’re like, ‘Okay.’ … It felt like a circus, a bit trying to sell ourselves… We all had our own little roles. It was fun. I actually enjoyed it. But you do kind of have to memorize your little thing. It almost feels like school.”

“The Great” may be Fanning’s producing debut in television, but she doesn’t mean for it to be her last.

“I hope it will lead to directing,” she said. “I’ve been on the lookout for articles and books and things like that, to get to produce.”

Watch the full interview with Elle Fanning on the “Variety After-Show” above.