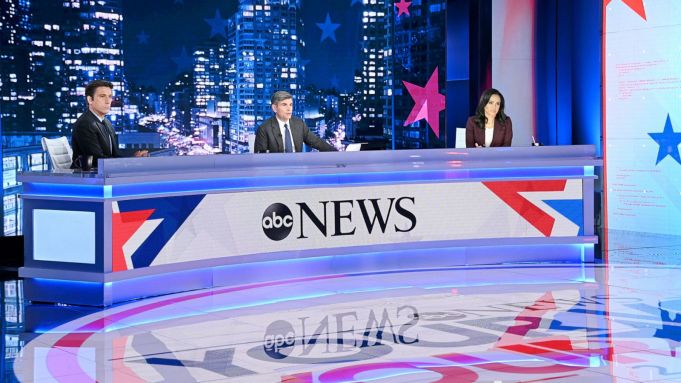 The Big Three network morning shows had the tough assignment Tuesday of launching a day of marathon election coverage with precious little actual news from the polls to report.

ABC News’ “Good Morning America,” NBC’s “Today” and CBS’ “CBS This Morning” all largely focused on Election Day issues and the voting process. They brought out familiar election experts, political surrogates, data wonks, veteran analysts and reporters to discuss themes that have been well-worn over the past few weeks as the clock ticked down to the end of voting amid the pandemic.

All three shows brought out the bunting for the nation’s quadrennial ritual. “CBS This Morning” originated from the Eye’s special election headquarters desk erected with plenty of red-white-and-blue motifs from inside the Times Square headquarters of ViacomCBS.

"It's going to be a long day and we are ready and excited to bring this to you." — @GayleKing on today's @CBSNews #ElectionDay coverage.

“Today’s” set was dolled up in patriotic hues and a few extra American flags seemed to be scattered around the show’s Rockefeller Center headquarters for the occasion.

Election Day coverage plans for ABC News, NBC News and CBS News underscore the primacy of morning show stars at the Big Three news divisions. Most of the Big Three’s core “dawn patrol” anchors (as the morning newsies are known) will be working double duty tonight in primetime coverage when the returns finally start to roll in.

The tone of the three network a.m. newscasts was subdued as the shows covered the range of ominous issues hanging over the polls this time around: the threat posed by coronavirus, concerns about potential unrest, violence at voting sites and the still-open question as to whether President Donald Trump will accept the results.

“I know that it’s a big day when Terry doesn’t have his ZZ Top beard,” “CBS This Morning” anchor Gayle King said to guest Terry Sullivan, a CBS News political contributor and GOP strategist who has been a staple of CBS News programs during this election year. Sullivan appeared on Tuesday with an inch or two less facial hair than he has sported in recent weeks.

On “GMA,” longtime contributor Dr. Jen Ashton offered a handy checklist of tips to help anxious voters destress and get through a long day. Her prescription?

“Tensions — we know they’re high,” “GMA” anchor Robin Roberts said with a sigh. “Literally everyone is feeling something,” Ashton observed.

On “Today,” Savannah Guthrie and Hoda Kotb were also in self-help and self-care mode with a roundtable segment with Carson Daly and Vicky Nguyen on how to deal with political divisions among family members and loved ones.

Navigating conversations around the election with friends, family and colleagues can be particularly tricky this year. @VickyNguyenTV joins us to discuss the do's and don'ts of talking politics. pic.twitter.com/CK84MfMwQy

Non-political guest bookings were probably hard to come by, even for national morning shows, on a day filled with so much uncertainty. “GMA” recruited Seth Rogen and his wife, Lauren Miller, for a segment plugging the couple’s fundraising work to add those suffering from Alzheimer’s disease.

“GMA’s” Amy Robach had a probing question for Rogen and Miller: “Did you manage to learn anything new about each other in quarantine? To which Rogen replied: “I think we found out how comfortable we both are at doing absolutely nothing.”