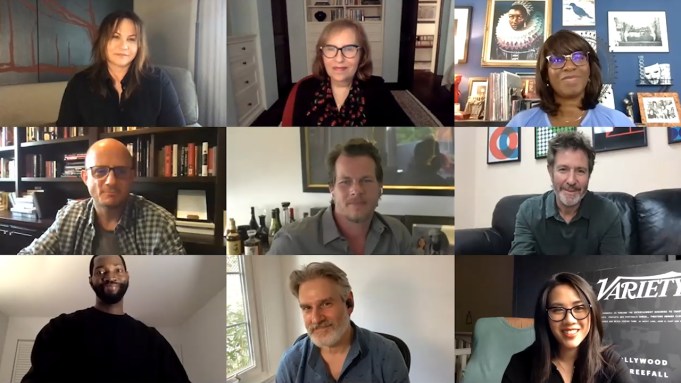 The question of when to return to production is looming large over Hollywood.

Despite the industry being given the greenlight to return to set (admittedly with plenty of limitations), a group of top drama showrunners at Variety‘s virtual “A Night in the Writers’ Room” Wednesday agreed that “we’re still in wait-and-see mode” — as “Truth Be Told” showrunner Nichelle Tramble Spellman said — and that a few guinea pigs need to go first before they feel comfortable bringing hundreds of people under their responsibility back to set.

Spellman, the showrunner of the Apple TV Plus drama, added that her show is currently scheduled to return to production on Oct. 15, which is an “incredibly optimistic” date, as she put it.

“We were on Zoom from the very beginning, and that first day in the Zoom room, I got off the call and then I slept for 16 hours,” Spellman said of her Season 2 virtual writers’ room. “My husband woke me up and was trying to take my temperature because he thought that I had gotten sick. It was such an adjustment. Zoom just really wears you out in a way that you’re not used to at all.”

For “The Good Fight” and “Evil” showrunner Michelle King, the tricky part so far has been obtaining permits to shoot in New York.

“Nobody wants us on the street,” King told moderator and Variety senior TV writer Elaine Low. “We’re having to write toward filming on our sets, but then every health provider can agree on only a few things, and that’s that you don’t want to be indoors with a lot of people for long periods of time — which is filming on a stage. It really is a conundrum…there’s nothing to talk about if you can’t be on a stage. That is crucial.”

Much of Apple’s “The Morning Show” takes place in the relatively cramped confines of the titular breakfast program’s studio, or the characters’ apartments. The new regulations are offering an opportunity to “get the characters out more,” according to showrunner Kerry Ehrin.

However, even with as many precautions as possible in place, Ehrin said that the return to production is still going to be “trial and error.”

“It feels like everybody is selecting the best possible knowledge and creating a scenario based on that. We’re all going to try, and I think it’s going to be trial and error. It’s the basic stuff, it’s separating people, having as few people on the set as you possibly can, it’s pretty logical stuff. It’s just a question of if you can, if it’s actually gonna be functional,” Ehrin said.

One of the only shows to return to set so far is the long-running CBS soap “The Bold and the Beautiful,” which had to pause production after only one day to drastically expand its COVID-19 testing capabilities.

“Ozark” showrunner Chris Mundy said that the testing would have to be extensive and regular before he would feel comfortable bringing a “crew of 150 people” back under his supervision.

“It’s all predicated on testing and having so much testing and fast testing available. If that’s true, it feels like you could see a way forward, day-to day-checking in on people. I don’t know what happens if one of your leads gets sick, that’s a whole different scenario,” Mundy said. “Everyone’s got to feel safe if they’re walking on the set. If there’s anyone that’s not, I don’t know how you can do our job…I don’t know what the reality of that is in terms of that level of testing.”

The pandemic has also forced writers into virtual rooms, which have suited some shows better than others and driven showrunners to take on a slightly different role.

Writers talking over each other is common in many in-person writers’ rooms, but over Zoom the problem is exacerbated, said Eric Kripke, executive producer of Amazon’s “The Boys.” Showrunners are being forced to “play traffic cop” more than ever before.

“The first week I was totally despondent. I was like, ‘This is going to be a huge failure and I don’t understand it.’ We had to give each other permission in the room to talk over each other, that was like a turning point for us. We had to stop and take this blanket apology to everyone that we’re not going to worry about being polite,” Kripke said.

While Zoom rooms present a bigger challenge for brand new series, incorporating the pandemic, or at least the public’s feeling about self-isolation, is harder for a period show like “Better Call Saul.”

Showrunner Peter Gould said he is currently trying to figure out how to end the series in a fitting manner, given the difficult current circumstances.

“We’re doing season six; is this suddenly going to look and feel different? We have a show that’s a period show, there are no iPhones…but how can we shoot anything? I think we have to be able to shoot scenes with multiple actors together indoors, otherwise we don’t have an industry; it’s just as simple as that. I don’t think the answer to this is that everybody is 30 feet away from each other yelling across the desert — that might be good for one episode, maybe — but I don’t I don’t think we can finish the story that way,” Gould said.

Later on, the conversation turned to the protests taking place across the country and the part that technology and social media is playing in the current political age.

On one side of the coin, “Westworld” showrunnner Jonathan Nolan weighed in on the dangers of people basing their opinions on everything they read online.

“I think on the optimistic side, we’re at a moment of reckoning, featuring into the larger societal conversation that’s taking place right now about how fundamentally unfair our society is. But it’s also creating and perpetuating the mechanisms that we use to connect to each other. They haven’t matured yet. Everyone’s connection to the world now is what they’re reading online, and what we’re reading online, as we discovered in the last election, is not necessarily an accurate representation of the world outside,” Nolan said.

On the other hand, as “David Makes Man” creator Tarell Alvin McCraney pointed out, the wave of protests and calls to defund the police and uplift the Black community would not be heard as loudly or widely if it weren’t for technology.

“The people who aren’t elite are able to pass information in ways that they never could before. They’re able to talk about things and express themselves,” McCraney said. He went on to describe a teenage student of his whose tweet went viral after she wrote on social media “about how to defund the police and how it actually works, how the abolition movement is sweeping, how young minds are changing. That would never have happened in my day of dialogue. That ability to engage across the country, to see representations of yourself that you couldn’t before.”