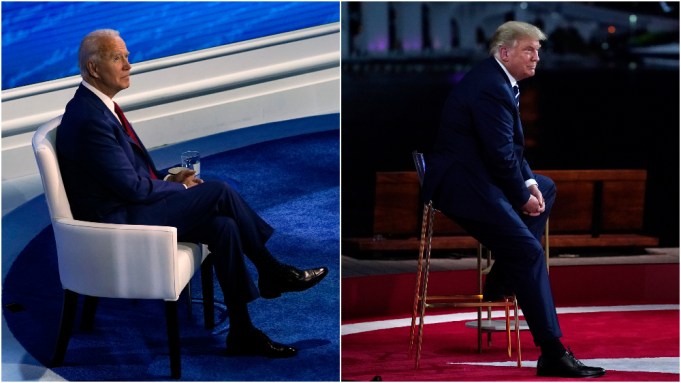 Presidential candidates Joe Biden and Donald Trump appeared in directly competing town halls on Thursday night, after the President dropped out of the second debate.

Trump’s hourlong appearance on NBC, which drew criticism across the industry and even an angry letter from top talent and showrunners who work with NBCU, trailed Biden’s 90-minute session with ABC in the ratings, even with the cable news networks factored in.

Biden averaged 14.1 million total viewers on the Disney-owned network alone, while Trump brought in 13.5 million across NBC, MSNBC and CNBC combined. In terms of the two cablers, MSNBC contributed 1.8 million viewers and CNBC just over 700,000, meaning that Biden beat Trump 14.1 million to 11 million in the direct broadcast battle.

There were already some signs last night that the Biden session might prove more popular, as the ABC telecast accrued more viewers than its rival on the live YouTube stream.

The Trump affair saw “Today” anchor Savannah Guthrie grill the President  on his tax returns and his response to the coronavirus pandemic, Guthrie also asked him to directly disavow white supremacy and QAnon, the online conspiracy theory about a pedophile cult which Trump retweeted.

“You’re not like someone’s crazy uncle that can just retweet whatever,” Guthrie commented at one point during the town hall.

Elsewhere on the night, Fox aired coverage of the Los Angeles Dodgers’ thrashing at the hands of the Atlanta Braves. A 10-2 result in the Braves’ favor averaged a 0.7 rating and around 2.7 million viewers for the network.

CBS aired a new episode of “Big Brother,” which ticked down to a 0.9 rating and 3.9 million viewers up against its stiff town hall competition. “Star Trek: Discovery” and a “Neighborhood” replay both managed a 0.3 rating and 1.9 million pairs of eyeballs a piece.

NBC’s new comedy “Connecting” benefited from its plump town hall lead-in, ticking up to a 0.5 rating and 2.4 million viewers. “Dateline” rounded off the night with a 0.4 and 2.5 million viewers.

Univision’s strongest program on the night was “Medicos,” which scored a 0.4 rating and 1.3 million viewers. While “Todo Por Mi Hija” came in at a 0.3 and 1.1 million for Telemundo.