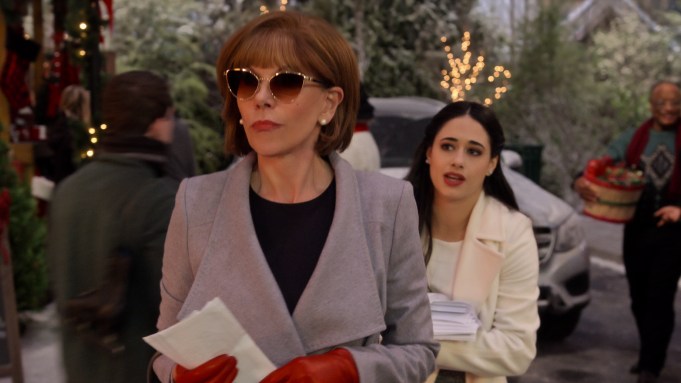 Netflix wants you to have a very Dolly holiday — Dolly Parton that is.

The streamer dropped a trailer for its upcoming original holiday movie musical, “Dolly Parton’s Christmas on the Square,” on Wednesday, featuring the legendary singer-songwriter’s vocals to get everyone in the mood for a small-town winter adventure.

“Christmas is a time for sharing, knowing you’ve been blessed,” Parton sings before being revealed on-screen in a glittery, glowing white ensemble.

“Who are you?” Christine Baranski’s character asks her. “What do you want from me?”

Parton replies that she’s “Angel” and she wants “change.” This is because Baranski’s character, the rich Regina Fuller, returns to her hometown after her father’s death to evict the townspeople (including an adorable group of puppies, as seen in the trailer, which you can watch above) and sell the land to a mall developer.

“The deadline to be out of your homes is now Christmas Eve,” Regina tells the citizens — while they are in church, no less.

It’s a tale of the “haves” and “have nots,” Parton sings. But being that the story takes place at the holiday season, soon enough the townspeople’s stories see Regina having a change of heart. And it doesn’t hurt that she also reconnects with an old love and gets guidance from Parton’s literal angel character.

This is one of the later holiday projects Netflix is premiering this year. The festivities begin this month, with the original movie “Holidate” and continue through the end of the year with such other original films as “Operation Christmas Drop,” another sequel to “The Princess Switch” (this time subtitled “Switched Again”) and the sequel to “The Christmas Chronicle,” as well as the limited series adaptation “Dash & Lilly” and unscripted projects “Holiday Home Makeover With Mr. Christmas” and the third season of “The Great British Baking Show: Holidays.”