David Tennant, Matt Smith and Jodie Whittaker on ‘Doctor Who’ Legacy and Future 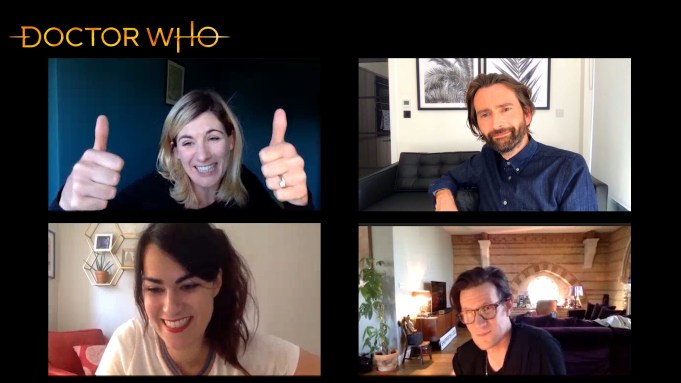 The Doctor may be able to travel at will through time and space, but it took a global pandemic to get three of the people who played the character in the same “room” for the first time. “Doctor Who” stars David Tennant, Matt Smith and Jodie Whittaker came together June 22 to celebrate the series streaming on HBO Max and reminisce about their respective times on the show and what it’s meant to them over the years. (As for the future of the series, Whittaker wouldn’t reveal much beyond the title of the upcoming Christmas special, which is “Revolution of the Dalek.”)

“When you realize it’s your turn [to play The Doctor], you do know what that means in terms of a loss of anonymity and the fact that the first line of your obituary has almost certainly been written,” says Tennant, who played the Tenth Doctor for three seasons. “But it’s a huge privilege — and also feels very precious, because people love it so much and carry it with them throughout their lives. To be the custodian of that, you just don’t want to break it.”

All three Doctors bonded over the role following them throughout their own lives, too. Smith, the youngest actor to play the Doctor, admitted to being followed by his onetime catchphrase of, “Geronimo!” Whittaker, whose historic casting as the show’s current Thirteenth Doctor gained both fervent praise and controversy, is constantly moved by those who tell her they’re inspired by seeing a woman Doctor. Nonetheless, she laughed as she remembered seeing a young girl in a café shortly after the initial announcement and thinking that she’d found her demographic — only to have the girl admit she “really wanted Ben Whishaw.”

When asked by Variety what a non-white actor could bring to the table, Whittaker was quick to point out that a recent episode did feature Jo Martin as an “extraordinary” version of the Doctor. She continued: “Working opposite Jo and seeing how exciting and vibrant and powerful her Doctor was, to me, it needed no explanation.”

While they all ultimately play the same character, the actors agreed that it would be “impossible” to suss out which traits and tics they might have adopted from previous iterations of the Doctor. “I’m sure they’re all in there,” mused Tennant, “because I was basically just regurgitating my childhood obsession.”