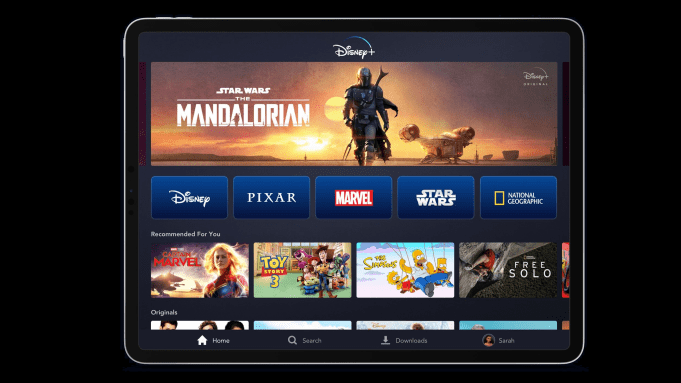 Disney Plus has amassed 28.6 million subscribers after just three months in business.

Walt Disney chief exec Bob Iger disclosed the figure on the company’s earnings call following its quarterly earnings release on Tuesday, the first subscriber figures for the streaming service that is leading the charge for Hollywood as the entertainment industry embraces the on-demand revolution. As of Dec. 28, the streaming service had attracted 26.5 million subs; the 28.6 million figure reflects the latest subscriber data as of Monday, said Iger.

Disney also disclosed that the ESPN Plus service, which bowed in April 2018, has reached 6.6 million subscribers as of year’s end. Hulu, which Disney now controls, has hit 30.4 million subscribers. Of those, only 3.2 million also pay for Hulu’s live TV channel bundle, but that number has nearly doubled in the past year from 1.7 million. Hulu subs overall are up from 22.8 million in December 2018.

Disney Plus’ fast start is a testament to the drawing power of Disney’s gold-plated brands and the decision in 2017 by chairman-CEO Bob Iger to go full-throttle on realigning the company to support the radical transition into direct-to-consumer distribution for its most prized content assets.

“From zero to where they are now is unbelievable,” Michael Nathanson, veteran entertainment analyst and principal at research firm MoffettNathanson, told Variety last week. “The company should bask in the glow of what they’ve pulled off. They didn’t play it safe. But they did the right thing for the company.”

As many as one-third of Disney Plus’ subscribers are expected to come from Verizon, which cut a deal with Disney to give a free one-year subscription to Disney Plus to all of the telco’s customers that pay for unlimited data plans. Nathanson praised that alliance as a smart move to quickly gain circulation for Disney Plus. Verizon is paying Disney for those subs, although likely at some discount from the retail $69.99 a year pricetag.

Verizon has not released specific numbers but executives said during the company’s earnings call earlier this week that it lured more wireless subscribers in the fourth quarter of 2019 than expected — its highest wireless net adds in six years — thanks in part to its Disney pact.

Verizon reported a net addition of 790,000 postpaid wireless customers, topping the average Wall Street estimate of 525,000 net adds, per FactSet. The one-year-free Disney Plus offer, available to eligible Verizon customers through June 1, 2020, was one of the factors for the lift, CFO Matt Ellis said.

Disney lived up to its reputation as a marketing machine through the Verizon deal and other consumer marketing efforts for Disney Plus. The campaign started in earnest with the company’s April 11, 2019, Investor Day presentation, which generated crucial advance buzz among Disney-philes. On day one, Disney Plus generated some 10 million sign-ups for a weeklong free trial. The conversion rate from free trial to paying customer will also be a key focus for investors.