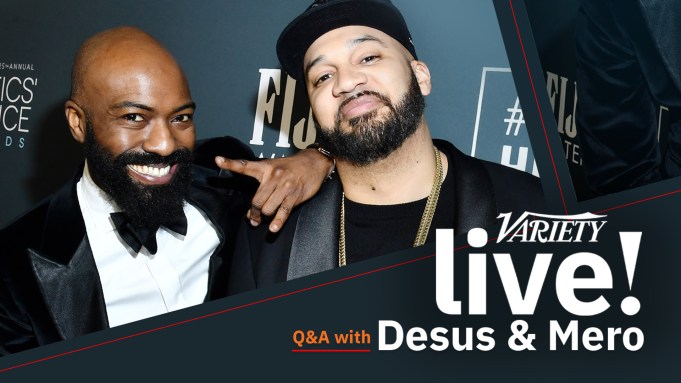 Desus and Mero have a message for anyone who played for the NBA in the 1990s: You have a standing invitation to be a guest on the duo’s late-night series on Showtime.

The hosts of “Desus and Mero” joined Variety this week for a live webcast interview that touched on everything from ESPN’s buzzy docu-series “The Last Dance” to how the pair are dealing with fame and adjusting to hosting the twice-weekly show from their homes.

Desus, aka Daniel Baker, and the Kid Mero, aka Joel Martinez, agreed that doing the show that revolves around the two riffing on headlines and trending pop culture topics is a form of therapy for the hosts and fans, especially in these troubled times.

“We’re like a human stress ball,” said Mero. “If you’re stressed out about things happening in the world, put it on and let it go.”

Desus added that watching the show is “low effort” for fans.

“We are never preaching to you. We’re a couple of guys making jokes. We’re like stress relievers,” he said.

Desus and Mero are longtime friends who grew up in the Bronx and extended their everyday patter  of riffing on headlines and cracking jokes into podcasts, social media followings. They started in latenight in 2016 with a series on Viceland. They’ve been on Showtime since early 2019 with a show that airs Monday and Thursday at 11 p.m.

“Our brand is Bronx-based humor,” Desus said. “It’s very unique but you don’t have to be from New York to get it.”

The pair are both diehard New York Knicks fans, which means that they had to brace themselves to watch “Last Dance,” which tells the story of Michael Jordan and the Chicago Bulls NBA dynasty fo the 1990s.

“Michael Jordan was our boogeyman. He was our Freddy Kreuger,” Desus said. Mero noted that the Bulls would “destroy” the Knicks every year. But watching “Last Dance” the hosts have seen another side of Jordan. As Mero described it: “You’re kind of a dick, but you’re kind of cool.”

The docu has reminded the pair how important basketball was in their formative years.

“Anybody that played NBA basketball in the ’90s, we’ll have as a guest,” Desus vowed.

On a more serious note, Desus and Mero reflect on how they rose from little-known podcasters to late-night TV (“We grinded,” Desus says) to dealing with fame to recognizing the weight of being role models for those from marginalized communities who don’t often see themselves on TV.

“We’re not supposed to be here. We’re not trained,” Mero said. “There’s a kid watching this right now saying ‘Can I do that? Is that a real possibility for me?’ Yes, it is. That’s a real responsibility. It will weigh on you.”

This was a blast, thanks @desusnice and @THEKIDMERO Fun talking to them about the evolution of the brand — which we all know is strong. https://t.co/H1U6csIzGK