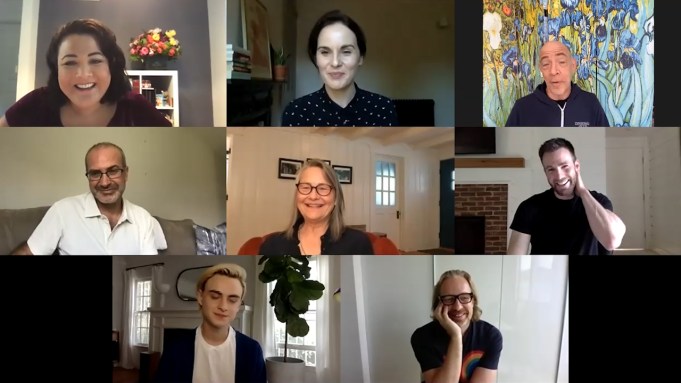 There are some heavy hitters behind the Apple TV Plus limited series “Defending Jacob,” including Oscar, Emmy and Tony Award nominees and winner. But star/executive producer Chris Evans wants everyone to remember he’s got some impressive trophies himself. “And Kids’ Choice Award winner, let’s just, come on, be fair,” Evans interjected upon introductions.

The cast and crew were reuniting for a conversation in Variety’s Streaming Room about the drama, which stars Evans and Michelle Dockery as Andy and Laurie Barber, parents of a 14-year-old boy (Jaeden Martell) accused of murdering a classmate. They were joined by co-stars Cherry Jones and J.K. Simmons, and the show’s creator/writer Mark Bomback and director Morten Tyldum to discuss the twists and turns of the series, which aired eight episodes from April 24 – May 29.

Based on the 2012 novel by William Landay, Bomback says the story was originally sent to him as a potential film, but he saw it as a limited series. “It’s not really the kind of story we make as films anymore, certainly not for the multiplex,” Bomback noted. “You can envision what the film would have been. It would have been a lot of plot, a lot of just engine and not really enough time to focus on character.” It was that character exploration that appealed to Bomback, who added he wanted to “really deep dive in terms of character and what it means to be a human being.”

For his part, Evans said he only read one episode before singing onto the project. “You have to kind of take a leap of faith,” he noted. “As an actor, my interest was just first meeting with Mark and Morten and just deciding, ‘Do you want to go through the creative process with these people?’” he recalled. “A lot of acting is risk. It’s just this very vulnerable landscape. So right away, I felt a certain type of comfort and understanding between them.”

Dockery, best known for her time on “Downton Abbey,” said she was excited to do a crime drama. “I mean, I love that genre and I hadn’t kind of stepped into that world as yet,” she revealed. “So that really interested me.”

Jones was also interested in the genre, but also had an interest in the storyline of how far parents will go for their children. “My mother used to always say that my parents would love my sister and me unconditionally,” she revealed. “And so we would always try to test the limit. And I would say, ‘If I ran away from home, would you love me?’ This is when I was really little. ‘If I stole something, would you love me?’ And then I remember the day I came up with, ‘If I killed someone, would you still love me unconditionally?’ And my mother said yes.”

Despite the heavy subject matter, the cast and crew said there was a lot of levity on set. “Some days on set, you’re in the pocket and you’re in a certain head space. But I think you do need to balance that. I think you got to blow off some steam,” Evans said, adding, the crew would have ping-pong competitions on set. “There was such a sense of camaraderie and morale was high. And it was a really, really pleasant place to come and work.”

Simmons, who plays Andy’s incarcerated father, noted, “Just sitting around chatting and kind of getting to know everybody and BS-ing with Chris a lot was, as usual, a big part of the fun.” To which Evans added this praise: “Morten actually said it, ‘The set never worked better than when J.K. was there.’ Everybody, the whole crew was dialed in. Those days were the most efficient days we ever had on set.”

While designed to be a limited series, Bomback says “never say never” when it comes to talk of a second season. “If the right idea strikes me, I would be lying if I said I don’t think about it.”

And it would give Evans and Martell the opportunity to work together for a fourth time. In addition to co-starring in last year’s “Knives Out,” it turns out that Martell’s first movie role was playing a younger Evans in the 2014 film “Playing It Cool.” “I filmed one day and we never met,” Martell recalled. “And I remember watching him from afar and being like, ‘Oh, I’m playing him.’”

To which Evans joked, “If this guy can do it, anybody can do it!”