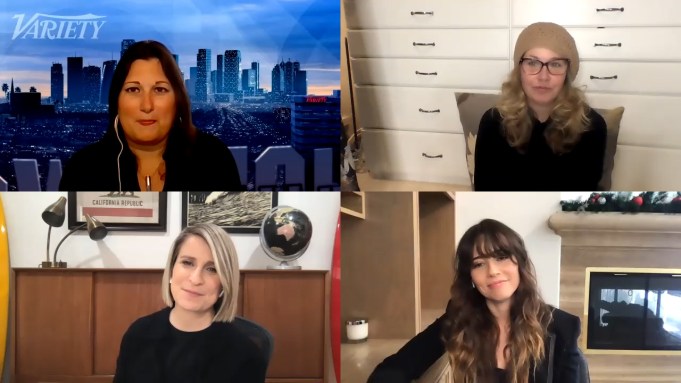 The hit traumedy “Dead to Me” is a one-of-a-kind series that explores the absurdity and twists and turns of life, according to its show creator and main leads.

“For me, I was longing to create a show that felt true to life in its tone, maybe not in the situation, obviously,” Feldman said. “It’s a bit of a heightened situation, sometimes even soap opera-esque at times. But I really wanted the characters to feel grounded. I wanted it to feel like ordinary people in extraordinary situations, because the way that I realized that I look at life is that any given day can be a traumedy.”

Applegate said she often jokes that the series is a documentary for her, due to the fact that her character Jen, a no-bullshit and quick-to-anger Brooklynite, is imbued with Applegate’s own personal history. “This show has its own tone, so it was beautiful for us to all create the world that we were living in and finding that balance between the humor not being jokes, but the humor because life is just bizarre and funny and painful,” Applegate said.

A significant aspect of the show’s tone is colored by grief, something Feldman wanted to emphasize in Jen’s personality, especially through the character’s penchant for cursing. “I definitely imbued the character with that New York toughness … I wanted her to be repellent to people, if possible, because that’s how it feels when you’re in grief. When you’re in grief, it … makes people feel really uncomfortable. Also, she’s extremely angry and she has every right to be.”

When crafting Cardellini’s character Judy, an optimistic over-apologizer and the antithesis of Jen, Feldman said her romance with Michelle (Natalie Morales) in Season 2 was deliberately crafted to be a unique portraiture of queer womanhood.

“I just didn’t want to tell the coming out story with Judy, because it’s just not about that,” Feldman said. “This is a show about grief, loss, forgiveness, friendship … She never has to make a grand announcement. She never has to sit Jen down and say, ‘I have to tell you something. I like women,’ because, in my experience, being gay or queer is just normal … and I was just longing to see a narrative on TV that reflected that normalcy.”

The panelists said the series’ success rests on the natural chemistry of its actors, including James Marsden, who played the toxic Steve in Season 1 and his polar-opposite amiable twin and Jen’s love interest Ben in Season 2. After Marsden asked Feldman to come back on the show in Season 2, she landed on the notion of twins, an idea she calls “stupid in the most beautiful way.”

“We wanted Jen to be the audience,” Feldman said. “We wanted somebody to be in there going like, ‘Are you fucking crazy? Who would believe this?’” And so, we thought, ‘Oh, well, then we’ll just have Jen say all the things that we think the audience would think,’ which is, ‘They’re the same fucking person.’ Because if we say it first, then we’ll beat everybody to it.”

While Applegate and Cardellini said they act off of the script, they also draw from personal experiences to improv scenes. Production keeps the camera rolling at the end of a shoot to see how the conversation evolves. In one scene showcased during the Q&A, Judy tells Jen she should love herself more after she laments about gaining 10 pounds over the summer.

“This was a conversation I think Linda and I were having in the makeup trailer,” Applegate said. “It’s actually something that Linda has said to me in life … That was Christina and Linda.”

The stars said they lean on each other during particularly emotional scenes, which often take a toll on the actors’ well-being. After shooting a scene where her character violently hits a car with a golf club, Applegate said she couldn’t stop crying. Cardellini comforted her by saying, “Your body doesn’t know you’re faking.”

“Professionally, creatively, it’s been so fulfilling and I love when we’re on set together and we’re doing what we’re doing because even when it’s most serious and even when it’s draining … it is satisfying on some level that I don’t know that I’ve experienced,” Cardellini said.

“Dead To Me” has been renewed for a third and final season, which Feldman has already begun writing. Production on the season is currently scheduled for 2021.