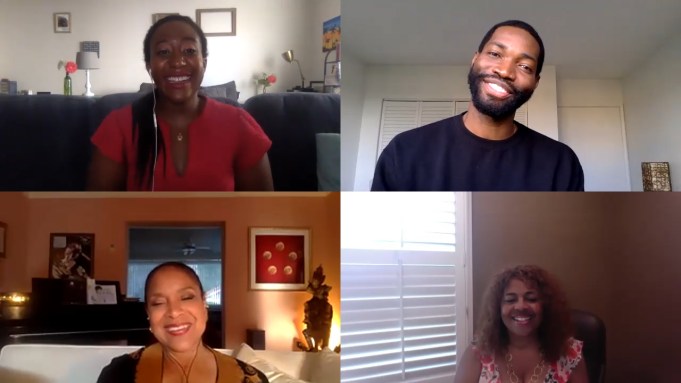 When Tarell Alvin McCraney presented the world with his Oscar-winning film “Moonlight” in 2016, he gave viewers a depiction of the Black experience that had yet to be told on screen. With “David Makes Man,” inspired by his own life events, McCraney explores the power of imagination and childhood trauma while once again expounding on the stories of the Black identity that are being told in Hollywood.

After screening the pilot episode in the Variety Streaming Room, McCraney, along with showrunner Dee Harris-Lawrence and cast member Phylicia Rashad, discussed the importance of Black visibility on screen and how the series adds to the stories being told in the industry about the Black experience.

The series centers around David, a 14-year-old prodigy from the projects who is haunted by the death of his closest friend. While attending a magnet school miles away from home, David must also grapple with caring for his little brother and his mother, who is recovering from drug addiction.

In centering around primarily Black characters, Rashad –– who plays David’s teacher Dr. Woods-Trap –– emphasizes how the show portrays each character’s experience with integrity and dignity.

“We’re not expanding what it means to be Black, we’re expanding the visibility of it,” she said. “I think what’s important is that characters be drawn with integrity. Each human being, right or wrong, has this measure of dignity that is honest. Everybody doesn’t have to be a physician or a lawyer, but what people do need to be and what we deserve to see is real human beings.”

McCraney, who also executive produced the show along with Lawrence, added that their intention of creating stories about the Black experience is to continue furthering those conversations in the industry. He went on to share that was one of the reasons why he wanted to take his series to Oprah Winfrey’s network, OWN, was because he felt “it was telling many stories about Black people.”

“To be able to add to a story of young people, young Black and Brown people like that we had on ‘Queen Sugar’ or that we had on ‘Greenleaf,’ and then to be able to expand on that with David, we thought we’re going to be in conversation with already great art. So no one will be able say, ‘Oh well, that’s how life is for Black people.’ No, that’s one version or even a portion of that life,” said McCraney. “There’s more to it.”

As a first-time showrunner on a series, Lawrence, who refers to the drama as a ten-hour film rather than a ten-episode show, said when she read the script for the first time, she saw the way David’s story reflected her own life.

“I am a female David,” said Lawrence. “I had those imaginations, I daydreamed…So I understood where [David] was coming from, and where he was trying to go.”

The daydreaming and the vivid imaginations, McCraney added, is where he wanted to make those universal connections with viewers where they could relate to the most intimate sides of David’s character and the kids he represents.

“No one really likes to talk about what that child is imagining,” said McCraney. “And I think it’s because if we know that someone is imagining, if we start to peek into and see ourselves in the ways in which we imagine with that child, it’s kind of harder to abandon them… It’s hard to condemn them even if they’re saying things that you don’t like or wearing pants the way you don’t like them, it’s hard to do that when you see that they have a heart that is reaching for the stars.”

“You can’t deny the humanity of one single character in this series,” Rashad added at the end of the panel. “That in itself is a great feat. It’s in the writing, it starts in the writing. But then when that creative team gets together and supports that writing and you get those brilliant actors…‘David Makes Man’ is history in the making.”

“David Makes Man” was renewed by OWN for a second season in December. HBO Max has required the streaming rights for the series which is set to debut on July 16.