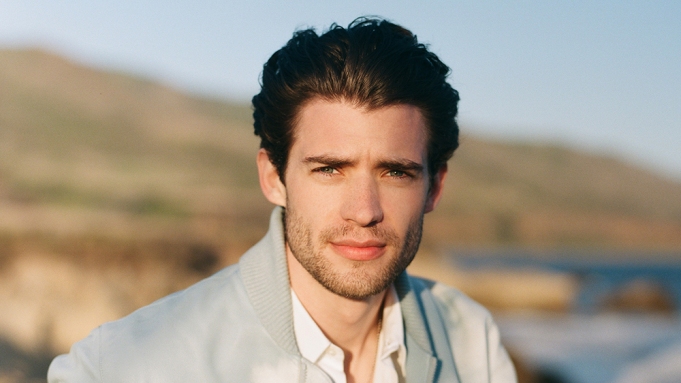 David Corenswet studied acting at Juilliard, but not even the most meticulous research into the history of showbiz could prepare him for Netflix’s “Hollywood.” Ryan Murphy’s miniseries is set in the 1940s golden age of moviemaking, pulling back the curtain on the repressed desires of the executives and stars who ruled Tinseltown.

But it is done with some major liberties. On the show, Corenswet plays Jack Castello, a World War II veteran who dreams of making it big on screen. While the character is not based on a real actor, he’s a composite — borrowing from James Dean and Montgomery Clift, among others. As the series opens, Castello is a gas station attendant who moonlights as a male gigolo (a story line plucked from the 2012 memoir “Full Service: My Adventures in Hollywood and the Secret Lives of the Stars” by Scotty Bowers). Jack’s first client is the wife of a prominent studio executive played by Patti LuPone.

“Hollywood” is Corenswet’s second Netflix TV series. He previously appeared as a tutor in Murphy’s “The Politician,” which returns for a second season next month. The 26-year-old actor spoke to Variety about his breakout year.

Were you offered “Hollywood” while you were making “The Politician?”

Just long enough afterward that I had given up all hope that I was ever going to be in any other Ryan Murphy stuff.

Did you have to audition?

No, it was an offer. I think it was the first role that I was ever offered without an audition, which is awesome.

Alexa L. Fogel, veteran New York casting director, was casting “The Deuce.” I was auditioning for a bartender in the first season, and I was really excited about it. It was a great little scene, and I came in really prepared — except I didn’t have my slides because at the time in New York, I didn’t have a printer.

I was very off-book, but at the end of the scene, I screwed up one line and then that just totally knocked me off my feet. I kept doing the scene over and over again, and would just stumble over lines here and there until finally Alexa had to ask me if I wanted to step out of the room for a minute.

I did, and I stepped back in and did OK. I actually got a call back for that role. And then Alexa ended up casting me in “The Politician.”

Could you relate to the scene in “Hollywood” where Rock Hudson is floundering at an audition?

How did you prepare for “Hollywood?”

Just watching old movies, basically. The cool thing about the character — the easy thing, the thing that sort of lets you off the hook — is he doesn’t know anything. He’s been in the war. I had, in my time as a student, done a good amount of research about World War II. I talked to my grandfather, who fought in World War II. So I had a good backdrop of the European theater, which was Jack’s only history.

I re-watched “Singing in the Rain” and the Fred Astaire and Ginger Rogers movies and the old movie musicals, “Guys and Dolls,” that kind of thing. I watched some of the movies that I had wanted to see that I hadn’t — some classic Brando movies and James Dean movies. I re-watched “A Rebel Without a Cause,” because I was kind of hoping that Jack would be a bad boy in the end. It’s such a strange movie. Elia Kazan was doing interesting stuff with “East of Eden,” another weird one. So it was fun to watch to get to watch those classics and have sort of mixed feelings.

I read somewhere that the original script for “Hollywood” was edgier.

A little edgier is putting it way mild. I don’t know if this is appropriate, but I mean, it was like soft-to-medium-core porn. It was very explicit and very descriptive. There were pages and pages just describing the sex and the intimate encounters. There were some things that you just knew, reading it, that were not going to show up on the screen. It’s like, “That’s not what we do in television.” And you could understand the point of that is more to describe for the actors what the characters are experiencing, but with Netflix and Ryan, you never know because there aren’t any rules.

Now, in the first conversation, Ryan said, “I want to do it tastefully.” In reading it, the reason I wasn’t immediately turned off — no pun intended — by the whole thing was one of the points of the show was to take these glamorous icons and show those people having all the base instincts and fantasies and cravings and kinks that anybody has in any era.

Was there a scene that you read where you thought, “I don’t know if I can do this…”?

Every scene I read, I wonder whether I can do it. I have no idea where I’m going to be able to do it until I show up on the day. But as far as the sex stuff, the scene where Jack gets introduced to the world and turns his first trick, in the finished product, that’s a beautiful sex scene with Patti LuPone. Much more about sex, it’s about the two characters and these lonely people who happened to find each other.

I’m not sure if I’m supposed to be saying this, but it was originally a scene between my character and the Duke and Duchess of Windsor — who are featured in the book by Scotty Bowers. And it was lifted from a scene that may well have taken place and that definitely went a bit farther and had less to do with the characters and had more to do with just the fun salaciousness of the activities. When I read it, I thought that would be a really big challenge.

At what point did you and Patti shoot your first sex scene together?

It was pretty early on. It’s funny. People ask, “How well did we know each other when we shot that scene?” We knew each other pretty well, because the week before, we had shot the scene from episode two, where there is no dialogue. I’m just, well, railing her on the bannister, on the stairs up to her cage of Oscars. So we had broken the ice at that point. It was somewhat tame, actually, then going to do this luxurious, three-page dialogue scene.

There’s been comparisons between “Hollywood” and Quentin Tarantino’s “Once Upon a Time in Hollywood.” Did you ever talk to Ryan about that?

When did “Once Upon a Time in Hollywood” come out? My conversation with Ryan would have happened before that. So I’m not sure that I was aware of it, but the obvious parallel is that they’re both historical fiction. And with all historical fiction, you have two options: You either take some characters and play them out through history, or you take a little detour and change history and imagine something else happened.

What can you tell us about the second season of “The Politician?”

I’m in it. Other than that, not much. It’s the same wonderful returning cast and Bette Midler and Judith Light have much bigger arcs in this one.

And Gwyneth Paltrow is back too, right?

Yes. I didn’t cross paths with her in my couple days of shooting, which is a bummer.

You’ve had such a big year. What are you doing next?

Reading scripts, as I have been for the last four years. Occasionally, there are some people who are a little more interested to talk to me than they would have been before one of these shows came out. But it’s very rare that things really change overnight. I”m back to auditioning. I’ve made some tapes in quarantine. I’ve been working on writing stuff as well. And I have a camera, so I’ve been shooting music videos for my friends — socially distanced music videos for my buddy who makes music, which is a ton of fun.