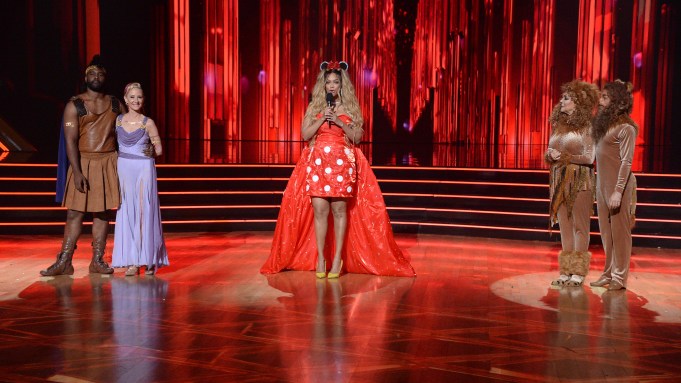 “Dancing With The Stars” has gone through quite a few changes this season, and it’s about to go through another: Derek Hough will step out from behind the judges’ table to take the dance floor once again, on Oct. 19.

The six-time Mirrorball champion will perform a routine with his girlfriend and “Dancing” alum Hayley Erbert, his first in-show dance since 2017. It is a routine he has three weeks to get ready, and he admitted during a virtual panel for the show on Wednesday that he woke up “sore” after his first session for it.

Hough took over a judging spot from Len Goodman at the start of this season and in his new role, Hough admitted that sometimes he has to catch himself because his “inner coach…inner teacher wants to come out, and I want to give a whole Ted Talk on how I can improve this jive in 4.5 seconds.” In his new role, he shared he often thinks about what he wanted when he was a dancer, and that was to hear how he could improve. So his approach with how he speaks to the dancers on the show is to come with compassion and empathy because he has been where they are and knows how hard what they are doing is.

“I appreciate them so much,” he said. “The fact that they’re just there, my respect level for them is already up here, and my job is how can I help them; how can I serve them?”

Executive producer Andrew Llinares said originally the plan was to have four judges, but with COVID restrictions, they’ve only figured out a way to have “sprinkles” of Goodman this season.

Other changes to the season have included Tyra Banks coming in to host the show and the lack of a live, in-studio audience, due to new health and safety guidelines amid the COVID-19 pandemic.

The redesigned set, Llinares said, as well as “not having backing dancers, not having huge set pieces” means that “everything is more focused on the couple [dancing] than it has been in a long time.” Changing the host, he said, was “all about evolution: making the show feel fresh, making the show feel new, reaching out to a new audience.”

Having Banks, Llinares continued, “refreshed the pace of the show. I think it’s taken the show to a new place in terms of feeling faster and just feeling different.” He also noted that she brings an energy and expertise into the ballroom that has “brought a new life” to the show.

Banks shared that she didn’t say yes to the gig right away: “I had to really think about it,” she said. It took a “couple of months to make sure I could really bring something unique and different.”

One thing she does completely differently is take part in multiple wardrobe changes throughout the show — a notable one coming up for a “twist on Halloween” episode may be the Bride of Chucky, she teased.

“I don’t personally care that much about fashion,” she said, adding paparazzi photos look very different from her red carpet shots, “but when I am on that stage I don’t think I’ve ever had this much fun with fashion in my entire career, including ‘America’s Next Top Model.'”

This season, theme weeks are taking place every other week, with the next one coming up on Oct. 12 and being “’80s night,” Llinares revealed. This means a combination of ’80s music, fashion and movies. The one after that is on Oct. 26 and will be that Halloween episode Banks teased. It will be “villains night,” Llinares said, in which “everybody takes on a famous fictional villain and plays homage to that villain.”

Regardless of whether the week is a themed one or not, the goal, Llinares says is to “create something that makes everyone feel good for two hours every week” and he is always on the look out for something that will be exciting and unique. This week, that includes a tribute to Cameron Boyce by Skai Jackson, a performance by Anne Heche that “talks about the time she was with Ellen [Degeneres] … and how that time affected her in her life,” and AJ McLean performing a Backstreet Boys number and getting his group involved in a “COVID-safe way.”

But no matter what changes come, Hough said the most important thing is that the “heart of the show” has stayed the same — and that, in his opinion, is the relationship between the pro dancer and the celebrity, and their journey.

“Dancing with the Stars” airs Mondays at 8 p.m. on ABC. Watch a new promo for the season above.