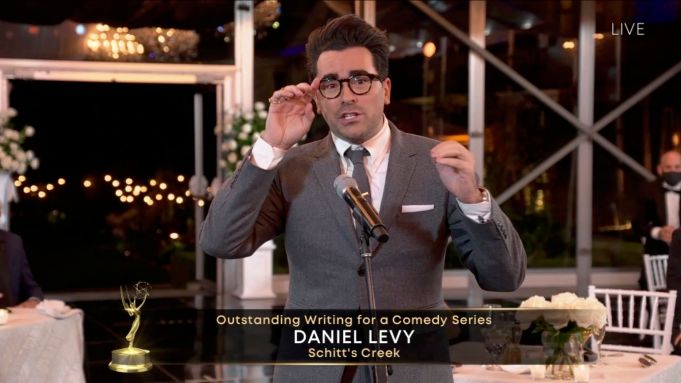 “To be honest this is the best way we could have ever ended the show,” Levy began, before changing tack to say that a movie isn’t entirely out of the realm of possibility. “If there is an idea that pops into my head it has to be really freaking good because this is a nice way to say goodbye. Fingers crossed we get a nice idea popping into our head soon….I would love to work with these people again.”

Levy and the entire main cast were gathered together in Canada to celebrate a historic night for the Pop TV show, and presided over a raucous backstage Q&A.

“What an absolutely unbelievable way to end our series, I don’t think you could ever ask for a better conclusion than tonight, we are absolutely thrilled,” Levy said.

The final question backstage was arguably the most important one, directed at Catherine O’Hara: Which wig would Moira wear to the Emmys?

“For the premiere Moria went with her own look, because when it’s a serious moment and there’s no facade needed, Moria lets herself show,” O’Hara said.

“For me I guess it would have been the big pink thing,” she added to great hoots of laughter from the rest of the cast.

The show swept all of the major comedy categories, with wins for stars Eugene Levy, Daniel Levy, Catherine O’Hara, and Annie Murphy. Daniel Levy also won for writing and directing, sharing the latter with Andrew Cividino. Those results make “Schitt’s Creek” is the first series to win every major comedy series award.